New openings could create up to 210 jobs, grocery retailer says 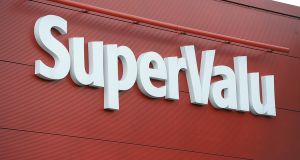 SuperValu intends to open three new stores this year as part of a €30 million investment programme although it wouldn’t disclose where those openings are planned.

The grocery retailer’s new store openings could create up to 210 jobs, it said on Monday, while it also plans to revamp 30 stores.

Musgrave-owned SuperValu flagged a new sales “milestone” of €2.7 billion in 2018, helped by 25 per cent growth in online sales with 26,000 new customers using the service.

Martin Kelleher, the company’s managing director, said it planned to roll out new shopping “concepts” including “vegan and vegetarian zones, new salad bars and health and wellness aisles,” as part of the revamp of its stores.

SuperValu is the Republic’s third most popular grocery chain, behind Dunnes Stores and Tesco, with a 21.6 per cent market share, according to the latest figures from Kantar Worldpanel. With 219 stores, it attracts more than 2.6 million customers each week.