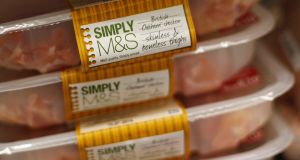 Marks & Spencer and online delivery company Ocado are discussing a joint venture that would hitch the fortunes of the struggling UK retailer to one of the country’s biggest tech success stories.

Shares of both companies surged after they confirmed talks on a deal to expand Marks & Spencer’s lagging home-delivery operations and boost its food business.

An agreement would free Ocado to focus on licensing its automated warehouse technology to supermarkets, a business that’s growing faster than its UK grocery operation.

If the companies reach an accord, Marks & Spencer could succeed Waitrose as Ocado’s grocery supplier. M&S intends to pay Ocado about £800 million to £900 million (€1 billion) for a 50 per cent stake in the venture, according to a source .

M&S has been slower to move into home delivery than other grocers in Britain, where the Brexit-hit pound has squeezed profit margins. Online giant Amazon and discounters such as Lidl and Aldi are also challenging the big, established companies such as Tesco and Sainsbury, which has responded with a deal for Walmart’s Asda that faces growing regulatory opposition.

Ocado, founded by former Goldman Sachs banker Tim Steiner, has grown into one of Britain’s most celebrated tech companies. After a slow start for its licensing business, the company has struck deals with US grocer Kroger Co, France’s Casino Guichard-Perrachon and others.

An agreement with Marks & Spencer would be broader than those deals, which are focused on the use of its technology. The licensing arrangements have given Ocado opportunities in areas where online shopping has grown more slowly than in the UK, one of the most advanced ecommerce markets.

“This would give Ocado more time and resources to invest and develop the technology side of the business while retaining some interest on the retail side,” said Dusan Milosavljevic, an analyst at Berenberg in London.

“It means they can focus more on selling their technology.”