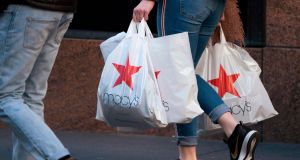 A multi-year programme will also help the Cincinnati-based company improve its supply chain and tightly control its inventory, it said.

The job cuts, at the vice-presidential level and higher, combined with its supply chain and inventory actions, are expected to yield annual savings of $100 million (€88 million), starting in the current fiscal year.

“The steps . . . will allow us to move faster, reduce costs and be more responsive to changing customer expectations,” chief executive Jeff Gennette said.

Department stores in recent quarters had shown signs they were finding ways to cope with declining mall traffic and tough competition from online seller Amazon.com , helped by a robust economy and strong consumer spending in 2018.

In 2019, Macy’s said it would invest in categories where the company already has strong market share such as dresses, fine jewellery, women’s shoes and beauty, as well as revamp 100 stores, up from the 50 stores it remodelled last year. It also plans to build out its off-price Backstage business to another 45 store locations.

Shares of the company were roughly flat at $24.27 in morning trading, after rising as much as 5 percent earlier.

Macy’s, which has closed more than 100 locations and cut thousands of jobs since 2015, reported a smaller-than-expected 0.7 per cent rise in holiday quarter same-store sales on Tuesday, below the company’s own expectations.

“Core EPS guidance came in a bit lighter than we were expecting, but no worse than buy-side fears,” said Gordon Haskett analyst Chuck Grom.

“Inventory levels are heavier than normal for Macy’s, but the company appears to have done a good job clearing through excess levels following a softer holiday period,” he said.