Who will step into Fitzpatricks shoes on Grafton Street? 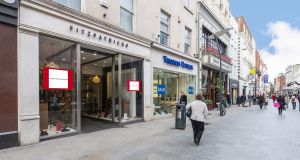 Fitzpatricks Shoes on Grafton Street in Dublin: family-owned business has been a fixture on the street since 1961.

A Dublin institution is shutting up shop on Grafton Street. Fitzpatricks Shoes has been a fixture on the street since 1961 but has decided to close its doors. Its departure will further diminish the presence of indigenous and, indeed, family-owned business on Dublin’s main shopping thoroughfare.

The Fitzpatrick family set up shop in Henry Street in 1926 before expanding operations across the city – initially to George’s Street, and later O’Connell Street and then Grafton Street.

The three sons of founder Thomas Fitzpatrick were involved from an early age and, in 1978, the business was split up so that each had control of their own store. The Grafton Street outlet went to Michael, and has been run for many years by his son Declan.

A grandson, Andrew, has since joined the business, leading its expansion online in 2010 and subsequently joining the board.

It hasn’t all been plain sailing for Fitzpatricks and an ill-judged venture into the CHQ building just ahead of the financial crash left the business exposed. The CHQ outlet closed in 2011 and another store in the Dundrum Shopping Centre was put into a separate company under the control of Declan’s brother, Paul, as part of a general restructuring of the business.

One of the critical factors helping the company survive the vagaries of the business cycle – including the property bubble of the early noughties which saw rents soar beyond the reach of many long-standing retail fixtures on Grafton Street – was the decision to buy the building many years ago.

Ironically, the rents that Declan Fitzpatrick once described as “bonkers” now offer the family an alternative income stream from the business. Grafton Street may be bustling but designing and manufacturing high-end shoes does not come cheaply.

Estate agent Savills is offering the building on a long-term lease at a rent of €510,000 per annum. In the long run, this might well prove to be a more profitable venture than selling shoes.