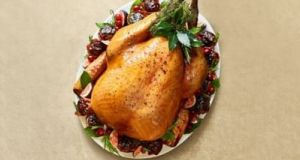 Irish customers of Marks & Spencer are set to pay up to 39 per cent more than their UK counterparts for their turkeys, mince pies and trifles this Christmas, as the British retailer is applying a hefty premium on the prices of its festive food range in Ireland.

The company’s 75-page Christmas food catalogue shows that customers of its 17 outlets in the Republic are being charged higher prices across the majority of the main categories.

A spokeswoman for Marks and Spencer suggested that the higher cost of doing business in Ireland is behind the differential.

“We work hard to ensure we offer our customers in Ireland great quality products that are competitively priced,” she said.

“Like any business, we have to take into consideration a number of factors specific to the Irish market when setting our prices, such as higher employment, rental and operational costs.”

However, the scale of the difference may surprise – and annoy – customers. Although sterling has been substantially weaker against the euro since the Brexit referendum in June 2016, UK retailers have been slow to cut prices to reflect this. A survey conducted earlier this year by The Irish Times of 12 UK retailers operating in the Republic found that currency mark-ups applied by these retailers varied significantly.