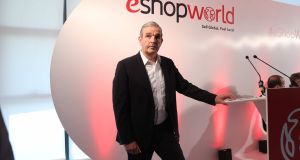 Tommy Kelly, chief executive of eShopWorld, which has just seen investor Ascendia – a joint venture between the French and Swiss postal services – increase its stake in the business to 50 per cent. Photograph: Jason Clarke

eShopWorld, the seven-year old Irish ecommerce firm that connects premium brands from Victoria’s Secret to Nike with consumers in more than 200 countries, has been valued at €300 million by a deal with French and Swiss postal service companies.

The Dublin-based eShopWorld’s more than 160 staff were briefed late last week on the transaction, which sees Asendia, a joint venture with La Poste in France and Swiss Post, increase its stake in the company to 50 per cent from 40 per cent.

When Asendia acquired an initial 40 per cent interest in 2013 from eShopWorld’s founder and chief executive, Tommy Kelly, it was originally envisaged that the Franco-Swiss joint venture would go on to acquire a significant majority stake.

However, it is understood that this agreement was renegotiated in recent months in light of the company’s faster-than-expected growth trajectory, to limit the stake increase to 50 per cent.

Founded in 2010 to make it easier for retailers to sell across borders, where they deal with varying currency, tax and localisation issues, eShopWorld was named Ireland’s fastest-growing technology company by Deloitte last December for the second year in a row. Turnover this year is expected to grow by 50 per cent to €300 million, putting the equity valuation of the company in line with sales.

eShopworld, whose bespoke ecommerce solutions help some of the world’s biggest sports apparel, footwear and lingerie brands, now plans to exceed $1 billion (€850 million) in annual turnover by the end of 2019.

It is understood that the increase in Asendia’s stake keeps eShopWorld management control in the hands of Mr Kelly and his team, though it is likely that the transaction will enable Asendia to consolidate the Irish-based business’s income in its group accounts.

Staff, many of whom have stock options, were advised last week of the stake rebalancing and told that the increased Asendia stake has no impact on the range of potential options open to the business to realise value for shareholders over time.

A spokesman for the company confirmed that a staff briefing was held last week but declined to comment on what was discussed.

The development comes seven months after eShopWorld said that it plans to create more than 250 jobs, mainly in technical development and research and development activity, over three years under a €25 million investment plan.

The company is headquartered in Swords, Co Dublin, and has locations in Newry, the United States, Singapore and the Netherlands.

In an interview earlier this year, Mr Kelly said sales growth was running particularly strongly in the US, Canada, Australia and Russia. He signalled that the company also had “bigger plans” for China and India.