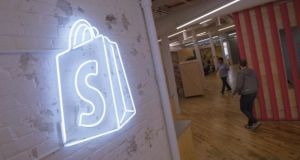 Canadian e-commerce company has a team of 150 or so “gurus” working in Co. Galway.

Shopify tumbled the most ever after Citron Research said it was shorting the stock and alleged that the Canadian e-commerce company’s rapid user growth was based off customers who would never become sustainable businesses.

In a tweet, video rebuke, and post on his website, Citron founder Andrew Left called Ottawa-based Shopify a “get-rich-quick” scheme and “dirtier” than Herbalife Ltd., which has been targeted by regulators for deceptive business practices.

Shopify helps small merchants set up online stores. Citron’s report alleges the vast majority of them are recruited by promoters promising the website is an easy way to make money without doing much work, and that eventually the company’s growth will crumble when these merchants fail.

Shopify fell 12 per cent to $103.30 at the close of trading in New York, its biggest one-day drop since going public in May 2015. A spokeswoman for Shopify declined to comment on the report.

Citron’s allegations raise a key question: how sustainable is the rapid revenue growth that has propelled Shopify into one of the most highly valued software companies in North America?

The company has always celebrated the fact that most of its users aren’t established businesses, but instead regular people inspired to start selling online by how easy it is to set up a Shopify store.

In an interview in August, Shopify chief operating officer Harley Finkelstein readily admitted that many businesses on the platform fail, but said the point of the company is to make it easy and cheap for merchants to experiment with new ideas and eventually find success.

“We’re not changing physics here, some small businesses simply don’t work,” Finkelstein said. “But the ones that do succeed will stay with us for a very long time.”

Left, who’s perhaps best known for his unsparing assessments of Valeant Pharmaceuticals International, said marketing material on Shopify’s website that called it “the online store for someday millionaires” was a violation of US. Federal Trade Commission rules that say a company must back up exactly how a customer can become a millionaire with its products.

Nutrition company Herbalife agreed to pay $200 million and make sweeping changes to its businesses after the FTC prohibited the company from claiming that “members can ‘quit their job’ or otherwise enjoy a lavish lifestyle.”

A spokesperson for the FTC declined to comment on Shopify.

Left also accused Shopify of paying bloggers and influencers to promote the company. “This is an $11 billion company that loses money, trading at over 20 times sales, that also is marketing illegally,” Left said in an interview on Bloomberg Television, adding that Shopify has “violated every FTC rule imaginable.” “I’m still short the stock and I’ll stay short the stock,” he said. “This has got a lot more way to go on the downside.”