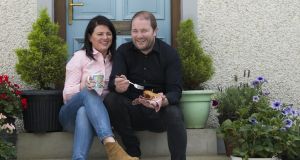 Ciarán and Melanie Breslin: “The biggest mistake we made would be the sleepless nights we have had over social media sites,” says Melanie.

Primrose, a joint patisserie and cafe, was established by Ciarán and Melanie Breslin and now includes a 2,500sq ft scratch bakery along with two cafe outlets at Carlisle Road and on the quay.

We have full control of everything that goes on to the plate. We’re supplied by Ciarán’s butcher shop, Breslin Butchers. Our vegetables come from Dalton’s Farm in Ardmore.

We also really go that extra mile to set the standard a bit higher. We go to Paris to get inspiration for our bakery, we go to London to get ideas for the menu at Primrose on the Quay, which would have more of a bistro feel.

What was the best piece of business advice you ever received?

A bit of advice that always sticks in my head is that no one is better than anyone else in the business. Everyone who works on the team in Primrose knows that.

We always try and treat customers like royalty and make sure they’re looking forward to coming back again.

The biggest mistake we made would be the sleepless nights we have had over social media sites. We would take any negative comments as personal attacks and found it difficult in the beginning to separate ourselves from that.

That took a while to overcome. Now we take all our feedback as constructive criticism and turn it into a positive.

This year, we’ve won two more awards. We won the Restaurant Association Award for Best Casual Dining in Ulster. Then we won a Chamber of Commerce award in Derry for Primrose on the Quay.

It’s quite humbling because you realise that you’re in along with great restaurants in those awards.

The people I admire would be other husband-and-wife teams. There are a few other restaurants in Derry that are pushing things forward – for example, the Walled City Brewery and Spaghetti Junction.

I admire the families that run those businesses locally, instead of all the big corporate businesses coming in.

Based on your experience in the downturn, are the banks in Northern Ireland open for business to SMEs?

Everything we’ve made or gained we put straight back into the business. We bank with Ulster Bank, but anything we do, we do it ourselves.

What one piece of advice would you give the government to help stimulate the economy?

The one piece of advice I would give the government would be to lower the VAT for the industry. Our tourism sector is driven by the hospitality industry, but the 20 per cent VAT [in Northern Ireland] is ruining the independents’ efforts to help drive that sector. It’s the reason so many independents have closed their doors.

A lower tax bracket and rate reduction for smaller independent retailers would encourage start ups and increase the offerings for tourists.

For the first 2½ years until I fell pregnant with my daughter, I was working seven days a week. I was doing all the baking myself. It’s only in the last three years that I took on more bakers.

Up until the day before I went into labour, I was still standing in the bakery making scones. I have now have a head bake. My manager, Shelly, looks after both premises and deals with things like rotas and ordering. We also have a head chef. It’s those three people I really need, although I’d be in our premises every day.

We have a new project on the go and we will soon be launching a venture that will be the first of its kind in the northwest. We’re finding the future very exciting at the moment.

I’d never sell it. It’s my love and I adore what I do. I’ve been approached to lease the business out but I can’t see that happening. Both myself and Ciarán love what we do.