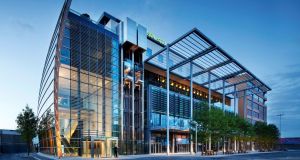 The Point Village shopping centre: Dunnes was meant to be the centre’s main tenant.

Department store chain Dunnes Stores has failed in its latest bid to get the Point Village shopping centre to hand over leases agreed by other tenants in the development.

Dunnes is defending a legal claim that it should pay €15 million to Point Village Development Ltd, now controlled by Nama-appointed receivers, in line with an agreement between the department store group, the shopping centre company and its developer, Harry Crosbie.

The High Court has refused Dunnes Stores’ application to see leases signed by other tenants with the Point Village. The recently published judgment, by Mr Justice Michael Twomey, states that it was not necessary to the case to allow the retailer to inspect the leases.

The case was the second unsuccessful attempt by Dunnes to see leases signed by the shopping centre’s tenants. The Court of Appeal turned down an earlier bid last year.

Dunnes was meant to be the centre’s main tenant. In 2010, the retailer agreed with Point Village Development Ltd that it would pay the shopping centre developer €15 million once the company had signed leases for seven other units in the centre.

The retail chain originally argued that this gave it the right to inspect the leases, but the Court of Appeal found against it and said that confirmation from the shopping centre’s lawyers was all that was needed.

However, that judgment suggested that Dunnes could get the right to see the leases if there were “fraud or manifest error”.

The retail chain went back to the High Court and argued that there was a manifest error in the certificate from the receivers’ lawyers, solicitors McCann Fitzgerald, confirming that the other leases had been signed, and it thus had the right to see them.

However, Mr Justice Twomey ruled that this was not the case, and said that there was no reason to differ from the Court of Appeal’s judgment.