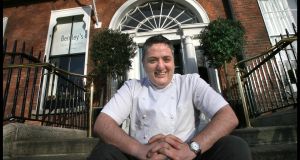 A bounce in sales at celebrity chef Richard Corrigan’s Irish operations, which include the Virginia Park Lodge in Cavan, helped overall revenues at his group of companies rise by 8 per cent to £10.8 million (€12.1 million).

Despite this, however, the group, Richard Corrigan Restaurants, just about stayed in the red. A tiny net loss in its recently-filed 2016 accounts of about €1,000 was an improvement on the €100,000 loss from the previous year.

Mr Corrigan’s group comprises the Virginia property, as well as his two London establishments, Bentley’s and Corrigan’s Mayfair. All three, including the Irish business, are operated through British subsidiaries.

Accounts for Virginia Park Lodge show sales doubled to €1.8 million last year, but the property made an operating loss of more than €400,000 and now sits on accumulated losses of about €1.5 million.

Staffing numbers at the boutique Cavan country estate rose by about 20 to more than 50 however, indicating a significant pick-up in business during 2016, even if while making a loss.

1 How safe is it to go back to the office?
2 Elderly parents living in property you own will save you on capital gains tax
3 More than 40% of help-to-buy recipients already had deposit
4 Owner of Dundrum Town Centre to sell prized assets
5 Most workers now expect choice to work from home part-time
6 Construction workers among first PTSB borrowers off payment breaks
7 Can a first-time buyer get relief on a buy-to-let home?
8 Regeneron says its antibody cocktail prevents and treats Covid-19 in animals
9 Irish factory activity rebounds in July from lockdown lows
10 56 financial firms entered or expanded Irish operations in 2020
Real news has value SUBSCRIBE