Is traditional retail on the verge of extinction? 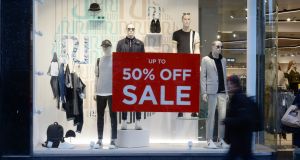 Stores are closing on a weekly basis on Irish and UK shopping streets in a crisis reminiscent of the US retail apocalypse, and there’s no sign of a bottom.

Department store chain Debenhams is shutting dozens of outlets as it fights billionaire Mike Ashley’s bid for management control. Rival House of Fraser is shrinking after being rescued by the tycoon last year.

With e-commerce giant Amazon. com luring shoppers away from physical stores, the Brexit deadline looming and discounters piling pressure on mainstream grocers, there’s no relief on the horizon. In the UK insolvencies have jumped by more than a fifth since 2016, with more than 1,200 retailers collapsing last year.

The UK’s shopping streets have been transformed over the last decade, with household names replaced by cafes, tattoo parlors, charity shops or just empty storefronts.

Department-store owner BHS, electronics chain Maplin and the UK arm of Toys “R” Us have disappeared. Others are desperately trying to avoid the same fate by entering into so-called company voluntary arrangements, which allow firms facing insolvency to close unprofitable stores and cut rents. Fashion retailer New Look, baby-product chain Mothercare and floor-coverings seller Carpetright have all taken that route.

High rents and property taxes are making it difficult for companies to keep stores open, and closings now outnumber openings. Once buzzing town centers are emptying out as shutters are drawn.

“There virtually isn’t a retailer of scale that wouldn’t prefer to lose some of their stores very quickly,” said Richard Fleming, head of European restructuring at Alvarez and Marsal.

One reason UK stores are suffering so badly is the growth of e-commerce, where the country is one of the global leaders.

With 17 per cent of retail sales occurring online, Britain is well ahead of the US and other European countries.

As stores close, jobs are lost. Although unemployment has fallen in the U.K. for the past few years, the retail sector is experiencing the opposite trend. The British Retail Consortium estimates that 900,000 jobs could be lost in the sector through 2025.

Even store owners in a solid financial position are reducing employment. The country’s biggest retailer, Tesco, plans to cut as many as 9,000 jobs this year. Food and apparel chain Marks & Spencer Group is closing 100 stores, costing thousands of jobs. Those who are still employed are also feeling the impact.

Department-store and supermarket operator John Lewis Partnership has cut workers’ bonuses - considered a benchmark of the country’s economic health - to the lowest level since 1953, when Britain was rationing amid a postwar

economic slump. The employee-owned company, which includes grocer Waitrose, saw its profit fall 45 per cent last year. Paula Nickolds, managing director of John Lewis’s department-store arm, has said it’s the most challenging time for non-food retail that she can remember.

Slumping consumer confidence is a main reason, with shoppers buying smaller basket sizes and opting more for sale items than full priced goods, she has said.

Brexit has weighed on shoppers’ minds and wallets. A slump in the pound since the vote to leave the European Union has cut spending power, while concerns about a possible economic slump after the departure are causing people to tighten purse strings. “This is bigger than it was during the 2008 financial

crisis because the stress is a lot more real,” Fleming said. If an economic downturn compounds the effects of the shift to e-commerce, “it will be horrible.” - Bloomberg

1 US threatens retaliation against EU over proposed carbon tax
2 Comcast acquires Irish cloud-based telco Blueface
3 US markets have worst day in three months on concerns over coronavirus
4 Money matters: ‘My father embarrassed us with his haggling’
5 Pilita Clark: When a rude boss keeps you waiting, why not walk out?
6 How to . . . move (almost) everything to your new phone
7 It shouldn’t be hard for Irish companies to be less male
8 Dyson picks Singapore for first electric car plant
9 State backs west Cork distillery as it buys out UK investor in €18m deal
10 Opioid executive admits to ‘no morals’ ahead of prison term
Real news has value SUBSCRIBE