An Post lines up mortgage market entry as profits rocket 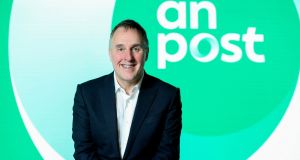 An Post CEO David McRedmond: ‘An Post’s move into a new world of e-commerce and financial services has delivered great results in 2018.’ Photograph: Maxwell Photography.ie

An Post is looking to launch its mortgage product in the spring of next year, it said on Wednesday when announcing a loan product that offers up to €75,000.

At a briefing in the GPO, the company’s head of retail, Debbie Byrne, said its consumer lending product will go live this month, allowing customers to borrow between €5,000 and €75,000 on terms ranging from one year to seven years.

The loan offering is through Avantcard and has a tiered interest rate starting from 8.5 per cent depending on a person’s credit rating.

The company is in the throes of a sizeable investment in its brands and product offering with financial services and e-commerce central to its strategy. With that in mind, An Post is launching a sub-brand called An Post Money, supported by a series of advertising campaigns. In total An Post is spending €5 million on a refresh of its brand. Its new advertising campaign begins this weekend.

An Post services about 1.5 million customers per week and processed €14 billion worth of transactions last year. It recently closed 152 of its branches, leaving it with over 950 branches across the State. Ms Byrne noted that their will not be any compulsory closures across its network.

“An Post’s move into a new world of e-commerce and financial services has delivered great results in 2018,” chief executive David McRedmond said, adding that its transformation was helped by “fixing our core economics”.

Another key plank of its growth strategy is ensuring that more government services are processed through regional post offices. While a move of the TV licence to Revenue from An Post had been mooted, Ms Byrne noted the organisation grew TV licence revenue by 1 per cent last year, delivering “an additional €1.8 million to RTÉ’s coffers”.

While revenue from mail services has witnessed a global decline, An Post recorded growth of 40 per cent in its parcel business last year with Christmas parcel deliveries up 60 per cent on the previous year.

Garrett Bridgeman, An Post’s managing director of mails and parcels, said the group is now the market leader in the parcel sector in the Republic with a share of over 40 per cent. He added that the company has just invested €15 million in a new parcel automation centre which is due to open in September.

Another new sub-brand, An Post Commerce, has been launched under Mr Bridgeman’s remit to provide solutions for domestic and international businesses.