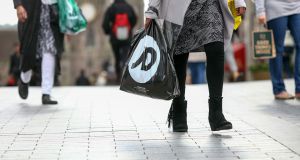 JD Sports Fashion agreed to buy smaller rival Footasylum in a deal valued at up to £90.1 million (€105.2 million), nearly a month after the company raised its stake in the youth footwear and clothes seller.

The company, which had raised its stake to more than 18 per cent last month, had previously denied that it was planning to make an offer for Footasylum.

Footasylum, founded in 2005 by one of the co-founders of JD Sports, sells footwear and apparel primarily to 16- to 24-year- olds and competes with JD Sports, Mike Ashley’s Sports Direct and ASOS among others.

Like other retailers, however, Footasylum is feeling the impact of sluggish British consumer spending, squeezed household incomes and uncertainty ahead of Brexit.

Its sales during Christmas were dismal, forcing the company, which sells sportswear made by companies such as Nike and Adidas across the UK, to cut prices and lower its profit expectations for the full year.

JD’s all-cash offer of 82.5 pence per Footasylum share represents a 77.4 percent premium to the target company’s closing price of 46.5 pence on March 15.

“Footasylum is a well-established business with a strong reputation for lifestyle fashion and, with its offering targeted at a slightly older consumer to JD’s existing offering, it is complementary to JD”, JD Sports said. – Reuters