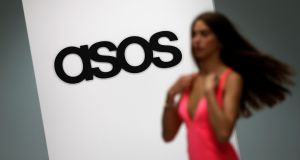 It’s the biggest fall since the company issued a profit warning following a “significant deterioration” in November sales, cutting its full-year guidance to 15 per cent growth from a range of 20 per cent to 25 per cent. Asos’s retail sales rose 11 per cent in the three months ended February 28th, leaving it playing catch-up to reach its target.

The restrained update from an online retailer that competes with Amazon. com and has furnished fashions to the likes of Meghan Markle shows that the UK’s retail crisis is not just impacting bricks-and-mortar stores.

Shares fell as much as 13 per cent to 2,790 pence in London trading, though they recovered to more modest losses later in the session.

“Asos’s first-half trading statement isn’t as reassuring as might have been hoped following its shock downgrade in December,” Paul Hickman, an analyst at Edison Investment Research, wrote in an emailed comment. “This leaves a task for the second half to get back to the guidance, which is not an ideal message for a business which has already lowered targets.”

Asos said it’s looking to improve its US business after unexpectedly high demand there caused “a significant short-term dispatch backlog which we have now cleared” at its Atlanta warehouse. It’s looking to cut prices and raise marketing spending in the second half, particularly in its largest markets, France and Germany, which continue to be challenging.

Sales in the company’s own-brand range, which makes up 35 per cent of its total goods, only slightly improved improved in the quarter after a disappointing first-quarter performance, Chief executive Nick Beighton said on a call with analysts. Asos maintained its full-year outlook. – Bloomberg