Debenhams in talks with lenders for £150m loan 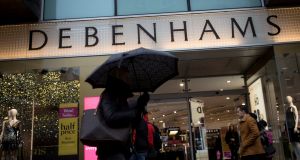 Ailing department store chain Debenhams said on Monday it was in advanced talks with its lenders for additional loans of about £150 million.

The company said £40 million from these loans would be used to refinance a bridge facility of the same amount announced on February 12th.

The announcement comes days after Mike Ashley, one of Britain’s most famous and unorthodox businessmen, said he was willing to take charge of Debenhams and would seek to remove most of the board and install himself in an executive role. –Reuters