Meet the Offaly man in line for a €58m bonus in new role at BooHoo.com

New chief executive John Lyttle will earn up to £1.5m a year in salary and bonuses 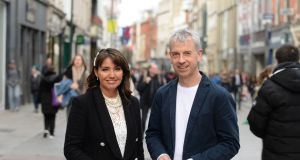 John Lyttle, the Irishman who was last year announced as the new chief executive of online fashion retailer BooHoo.com, has officially taken up the role.

Lyttle, who was previously chief operating officer of fast-fashion chain Penneys/Primark, stands to collect £50 million (€58 million) in company shares if he oversees a 180 per cent growth in BooHoo’s market value from its current level of £2 billion within five years. The group is targeting major international expansion.

The Irish fashion executive, along with Kane, was in Dublin for a BooHoo company event on the day he officially took the reins at the retailer, which specialises in selling low-price fashion items to young online shoppers from age 16-30.

Lyttle, who will earn up to £1.5 million annually in salary and bonuses, told The Irish Times he had no qualms about moving directly from Primark, a business that has always eschewed online sales, to BooHoo, a pure digital retailer.

“Whether you’re selling in a store or selling online, the essence of a fashion retail business is about having the best product,” he said. “The principles are much the same for traditional retailing and online: right product, right brand, right price.”

BooHoo is headquartered in Manchester and is expected to report sales for the year to the end of February of about £840 million, up about 45 per cent on the previous year. It runs four brands, including BooHoo, Pretty Little Thing and the US-focused Nasty Gal, which are all female focused, and BooHooMan.

The group’s main markets include the UK, US, Australia and most of Europe, but Lyttle and Kane both hinted that it is formulating major expansion plans, such as to enter new markets.

“There is still a huge opportunity for the brands in their home markets- online retailing in the UK is nowhere near mature,” said Lyttle. “But clearly there are plans to grow a lot bigger in the future.”

Kane, who founded the business with Kamani in 2006, said there were “lots of ideas on the table” to help the BooHoo group grow.

“We’ve a long way to go. Will there new new brands? Who knows. If there is something relevant, we’ll do it. It could be a new customer fit, a new country we’re not working in yet, or we may want to look at mergers and acquisitions.”

The day before Lyttle took the reins, Kane’s last day in the co-chief executive role was also her fifth anniversary running a publicly listed business. She suggested that part of her and Kamani’s new roles will be to leave Lyttle to grow the business in its existing markets, while they scout expanding its footprint.

“Will we be opening new doors? Of course. Where Mahmud and I will be complementary to John is in helping him to do that, while he grows things in our big markets.”

In his eight years at Primark, Lyttle was a senior figure in the global expansion of Dublin-headquartered fast-fashion retailer, who most recently entered the US after breakneck growth in Europe.

He said he will use his experience of helping to manage Primark’s rapid growth in his new role with Boohoo, which targets many of the same fashion market segments, albeit digitally.

“We all can see where this company can get to. It’s a high-growth business, and this is a big opportunity,” said Lyttle, who started his retailing career as a trainee store manager with Penneys and later worked for Dunnes Stores and Arcadia before returning to Primark.

“We haven’t even thought yet about China, India, South America... those are all long, long-term targets. The room for growth in our current markets is huge. Managing that and getting it right is huge.”