‘I very much want to be out of Europe’ 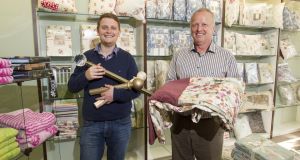 Chris and Ossie Wallace of Bedwin Soft Furnishings. ‘I would be extremely annoyed to see another referendum,’ says Chris

Bedwin Soft Furnishings is a second-generation family business founded by Ossie and Pamela Wallace in Kilkeel, Co Down, in 1984. The business now has a retail branch in Warrenpoint and Banbridge. Ossie and Pamela’s son, Chris, who is sales director, said they now also carry out fit-outs in the Republic and Northern Ireland.

They fitted out Liberty Insurance in Dublin and completed work on 88 high-end apartments in Number One Ballsbridge late last year.

I’m pro-Brexit so I was happy to see the outcome. I do not want to see us leave with no deal and adhering to WTO tariffs. But the deal that is currently on the table is not a good deal for the UK.

Every business will be affected short term, especially in the event of a hard Border. Long term, we’ll be gaining by getting our sovereignty back.

Very much so. Exports for us are with the Republic of Ireland and we’re in the South one day a week. We manufacture blinds for 13 other retail stores there.

I can’t see the green card to drive in the South happening. The Common Travel Area agreement outdates Europe and gives us free movement of people between the North and South of Ireland.

Through InterTrade Ireland, we took out a Brexit voucher. That let us enlist the help of a professional to identify what we can do to protect ourselves.

No, not really. We have great relationships with some of our suppliers in the Republic.

In Kilkeel, we have one of the largest fishing fleets in all of Ireland which exports to Asia and the Emirates. Why can’t that be replicated for high-end blinds and window dressings? When we’re out of Europe, we can get the best deal possible with other countries.

What is Brexit-ready? I very much want to be out of Europe but I can’t understand the incompetence of the government, that it had 2½ years and is still leaving it to the last minute to get something sorted.

Our next delivery of curtain poles, which comes from just outside Dublin, is for four to five months ahead instead of two months, which is what we usually order.

The southern government is also relying heavily on exports to the UK and to Northern Ireland, and vice versa for the UK. Both governments are bound to be able to put a bit more pressure on Europe to come up with an agreement that won’t force this backstop.

How do you think the both governments have handled the Brexit negotiations?

It pains me to say it but I believe the Irish Government has handled it a lot better than we have. In Northern Ireland, we don’t have any real representation. Yes, we have 10 MPs but there are a whole lot more not sitting at Westminster.

Looking out five years, do you think your business or industry will have changed as a result of Brexit?

For Northern Irish business: would you like to see a second referendum on Brexit?

I would be extremely annoyed to see another referendum. I do not want a situation where the government has a referendum, the people speak and then they turn around and say they don’t like the answer.