Up to 50 stores scheduled to close 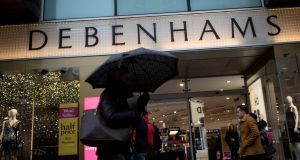 Debenhams, which trades out of around 240 stores, has turned down an offer of a cash injection from Mike Ashley’s Sports Direct, which is its main shareholder with a nearly 30 per cent.

Debenhams, once Britain’s biggest department store chain, issued another profit warning on Tuesday as it thrashes out a restructuring deal with landlords, local authorities and creditors that will lead to it closing at least 50 stores. It was the fourth profit warning in 15 months.

Shares in Debenhams, which has struggled to keep pace with consumers moving online and to cheaper competitors, fell sharply after it said it was no longer on track to hit an annual profit target of £8.2 million set in January.

“We are making good progress with our stakeholder discussions to put the business on a firm footing for the future. We still expect that this process will lead to around 50 stores closing in the medium term,” Sergio Bucher, chief executive of Debenhams, said in a statement.

Debenhams, which trades out of around 240 stores including five outlets in Ireland, has turned down an offer of a cash injection from Mike Ashley’s Sports Direct, which is its main shareholder with a nearly 30 per cent stake.

Sports Direct bought department store chain House of Fraser out of administration for £90 million (€104 million) last year and analysts have suggested that Ashley might want to put the two department store groups together.

Debenhams, which last month secured £40 million in extra funding from some lenders, said talks with stakeholders had progressed to include options to restructure its balance sheet to address its future funding requirements.

The company’s net debt stood at £321.3 million as at September 1st, nearly nine times its market valuation of £39.2 million.

It also said its annualised £80 millioncost saving programme was on track.

However, it said the restructuring was likely to be disruptive to its business over the coming months and blamed a 5.3 per cent fall in like-for-like sales in the first half on weaker retail spending and higher financing costs.

Debenhams’ shares, which have lost more than 90 per cent since the start of 2018, were down 7.33 per cent at 2.95 pence on tuesay morning , with analysts looking beyond its results.

“The real story is when the group will launch a CVA (company voluntary arrangement), equity raise and restructuring plan,” Peel Hunt analysts, who rate the share a “sell”, wrote in note.

A CVA would allow the group to accelerate store closures and cut its rent bill.

Debenhams said it will provide a further update in its interim results announcement, but has so far not provided a date. Peel Hunt expects an announcement by the end of April.– Reuters