Irish arm unaffected by the sale of ELC in the UK for £13.5m 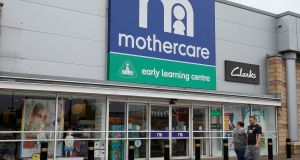 Mothercare’s UK business has been unprofitable for more than a decade. Photograph: Andrew Yates/Reuters

British baby products retailer Mothercare said on Tuesday it plans to sell its educational toy brand ELC to Teal Brands for £13.5 million (€15.75 million) as it looks to cut debt, sending its shares up 6 per cent.

The company’s sales and profit have been hammered by intense competition from supermarket groups and online retailers in its main British market as well as by rising costs.

In addition to the sale of Early Learning Centre Ltd (ELC), it will also sell some related assets, Mothercare said. It will, however, retain some ELC inventory to sell later.

Proceeds from the transaction will be used to cut debt by about £17.5 million over the next year, the company said.

“The Group does not have the necessary capital, resources or scale in this category to continue to invest and develop the own-brand ELC toys needed to maximise returns from this specialist brand,” the retailer said in a statement.

Mothercare’s Irish franchisee noted that it also remains a franchisee of the ELC business, “so will remain unaffected by the sale of the ELC in the UK”. “Mothercare Ireland is a family-owned business, separate to the UK, and operates as part of the Mothercare International franchise,” the company added.

In the third quarter, sales at the UK PLC fell 18 per cent due to lower online demand for its baby products and fewer discounts, leading to a double digit dip in UK like-for-like revenue.

Mothercare’s UK business has been unprofitable for more than a decade, forcing the company to detail a survival plan in July that includes closing over a third of its UK stores and slashing costs.

The company also said it was aiming to be debt free by the end of this year.

At 17.80 pence, the company’s shares were among the top percentage gainers on the London Stock Exchange early this morning. – Reuters