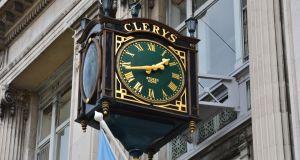 Minister claims the judge failed to strike a balance between the public interest in the prosecution of the offences and any risk of an unfair trial. Photograph: Alan Betson

A ministerial challenge to a judge’s decision to strike out charges linked to redundancies at Clerys department store in Dublin due to delays in the disclosure of evidence has opened before the High Court.

Judge Brennan’s decision was made on grounds including that the prosecution had failed to comply with an order for disclosure.

The defendants had been charged with offences contrary to provisions of the 1977-2014 Protection of Employment Acts arising out of the closure of Clerys in June 2015, when 460 people lost their jobs.

Some 134 of those were employees of OCS Operations.

Judge Brennan also ruled any further adjournment would encroach on the defendants’ rights to fair procedures and an expeditious trial.

Ms Foley, Mr Redmond and the company’s legal teams had applied to have the charges struck out on the grounds they could not get a fair trial without being provided with certain material from the inspectors appointed by the Labour Court to look into the redundancies at the department store.

In her High Court action against Ms Foley, Mr Redmond and OCS Operations, the Minister, represented by Padraig O’Dwyer SC and Breffni Gordon, seeks to quash the District Court order. She claims the district judge failed to strike a balance between the public interest in the prosecution of the offences and any risk of an unfair trial.

The Minister further claims the striking-out order was wholly disproportionate and unjust having regard to all the circumstances of the case.

The Minister had fully discharged the duty to make disclosure, it is claimed.

The case briefly opened before Mr Justice Charles Meenan on Tuesday. Given the volume of legal documents, the judge said he would read them in chambers and adjourned the matter to Wednesday.

He agreed with counsel that this would reduce the time it would take to hear the action, which is expected to last between three to five days.

1 Hurrah for the companies giving staff more time off
2 RTÉ to seek 70 voluntary redundancies as ‘large costs’ beckon in 2021
3 Some Irish money market funds came close to danger in March
4 Covid-19 will worsen shortage of accountants, says CPA Ireland
5 Sustainable investment: How your pension can help tackle climate change
6 Start-up Loanitt raises €570,000 as it looks to double headcount
7 ‘We lost money on our planned wedding in Spain. Covid saw to that’
8 Aryzta to pursue asset sales as takeover talks fail
9 Samsung patriarch Lee Kun-hee dies at 78
10 How to make the hybrid workforce model work
Real news has value SUBSCRIBE