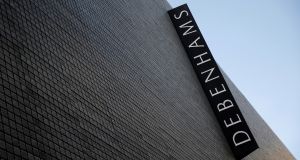 Struggling British department store group Debenhams said on Friday its shareholders could be wiped out as a result of some of the restructuring options it is considering and rebuffed a bid by Sports Direct to buy its Danish business.

Debenhams has issued a string of profit warnings and lost 90 per cent of its market value in the past year. The company is trying to fend off an attempt by its largest shareholder, Mike Ashley’s Sports Direct, to take control of the business.

Debenhams said it was seeking £200 million (€234 million) of additional funds from lenders, allowing it to pursue restructuring options to secure its future.

But the retailer said “certain of these options – if they materialise – would result in no equity value for the company’s current shareholders”.

Its shares plunged more than 44 per cent on the London Stock Exchange. At a share price of 1.73 pence, the business would be valued at just £20 million, while its net debt as of January 5th stood at £286 million.

As with Sports Direct’s previous offers of assistance, it came with conditions – that Ashley becomes chief executive of Debenhams.

Debenhams said that Magasin was a key part of the group and that Sports Direct’s proposal wouldn’t address the company’s funding and restructuring requirement.

It also said there were concerns about Ashley becoming chief executive as Sports Direct owns competitor House of Fraser.

“The board has remained open to engagement with Sports Direct throughout its refinancing process and has provided clear guidance on what would represent workable solutions,” Debenhams said in a statement.

“This guidance has been repeatedly ignored by Sports Direct.”

On Thursday, Sports Direct, which owns nearly 30 per cent of Debenhams’ shares, requisitioned a meeting of the department store group’s investors, with the intention of removing all current board members other than chief financial officer Rachel Osborne.

A Sports Direct executive told the Financial Times this week it would seek to buy Debenhams if the department store chain did collapse into administration.

Analysts expect Debenhams’ restructuring to include an acceleration of its store closure plan and see a so called prepack administration as an option.

Debenhams said it was seeking agreement from bondholders to change the terms of some of their bonds as part of the process to secure the new loans of up to £200 million from existing lenders.

It had previously said it was working on a plan to raise an additional £150 million.

Debenhams has launched a “consent solicitation” for holders of its 5.25 per cent senior notes due 2021. This process seeks consents from bondholders to certain amendments to the existing notes.

A successful consent solicitation would allow Debenhams to enter into the new loan facilities. – Reuters.

1 Basic income for all: Has the Covid crisis given us a new economic model?
2 Direct sea routes to Europe offer certainty in choppy Brexit waters
3 ‘I don’t need to do any of this. . .I don’t actually need to work.’
4 Admission of mistake in Oxford vaccine dose raises doubts over reliability
5 Promontoria barred from pursuing doctor over Ulster Bank loan
6 There was no vaccine for Anglo: Why the last crisis was different
7 Only way is up for Stripe as valuation skyrockets
8 Kinzen raises $2.2m as it helps clients fight ‘misinformation’
9 Online shoppers face unwelcome tax surprise
10 Pandemic brings a halt to Zara-owner’s Irish expansion
Real news has value SUBSCRIBE