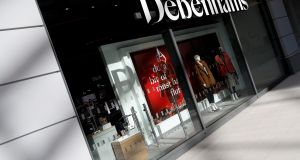 Debenhams said it would continue with its funding plans. Photograph: Peter Nicholls/Reuters

A move by Mike Ashley’s Sports Direct to pursue a possible offer for Debenhams got a cool reception from the ailing British department store group on Tuesday which warned it would not address its immediate funding needs.

Sports Direct, which last year bought department store chain House of Fraser out of administration, has a near 30 per cent stake in Debenhams and has been trying to wrestle control of it for months.

In an announcement after the stock market had closed on Monday, Sports Direct said it was considering buying the whole of Debenhams to prevent a restructuring that could wipe out all shareholders. Though Sports Direct did not indicate a price, its move prompted a jump of as much as 52 per cent in the department store group’s battered share price on Tuesday.

Debenhams said its board would give any firm proposal from Sports Direct “due consideration”. But it warned: “Given the timetable associated with any public offer, an offer for the company would not, in itself, address Debenhams’ immediate funding requirement.”

Debenhams said it will continue with its plan to seek £200 million (€234 million) of additional funds from lenders that it detailed on Friday. It has said that gaining those funds will allow it to pursue restructuring options to secure its future.

While Debenhams has warned that certain of these options would result in no equity value for current shareholders, its preference remains a solvent refinancing of the business. Bondholders have until Thursday to back the refinancing plan.

Debenhams said any proposal from Sports Direct must provide an indication of the offer price, the form of consideration and any other terms. It also needed a clear plan from Sports Direct of how Debenhams’ existing debt – which would fall due on any change of control – would be repaid and a proposal that addresses its immediate funding requirements.

Under UK takeover rules Sports Direct has until April 22nd to announce a firm intention to make an offer. “If Mike Ashley wants to make this stick, he needs to come out with an offer pretty quickly, along with a plan to meet Debenhams – immediate funding needs,” said Laith Khalaf, analyst at Hargreaves Lansdown. Ashley has already offered various conditional loans and asset purchases and is also trying to oust all Debenhams’ directors, apart from its finance chief, from the board. – Reuters