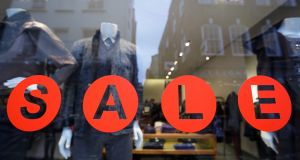 A sale sign is seen in the window of a Ted Baker store in Covent Garden, London. Photograph: Jason Alden

The company said it had come up with several strategies and contingency plans to minimise disruptions caused by Brexit, including forming a group to work with external advisers to identify key risks.

The retailer, housed in London’s “Ugly Brown Building”, said its Brexit review included a look at its regulatory compliance, trade and team members.

Ted Baker, which was founded in 1988 and has about 500 stores and concessions globally, said retail sales rose 4.2 per cent to £461 million including its online business, while retail sales in its UK and Europe business rose 4.6 per cent to £315 million.

The stock fell more than 40 per cent in 2018, hurt by lower wholesale sales and retail sluggishness as consumers scaled back on spending. Ted Baker also dealt with a long and harsh winter in Europe and North America, followed by an unusually hot summer.

The end of 2018 brought more turmoil as Ted Baker announced an independent investigation into misconduct claims against its founder after an online campaign claiming to represent over 200 employees asked for an end to “forced hugging” and “a culture that leaves harassment unchallenged.” – Reuters

1 Revenue publishes list of companies tapping State for wage support
2 How long can Government afford to keep State pension age at 66?
3 Grocery shopping app Buymie delivering for Devan Hughes
4 Bake-off soy sauce tweet backfires for UK trade ministry
5 Trump vs Biden: Stakes are high for the Irish economy
6 Corporate America is breaking with Donald Trump
7 Tighter regulations for car makers will drive buyers to choose electric
8 Developers may need to go back to the drawing board as one-beds fall from favour
9 Covid-19 will have a significantly worse impact on UK public finances than on ours
10 Johnny Ronan loses out on €315m Dublin docklands deal
Real news has value SUBSCRIBE