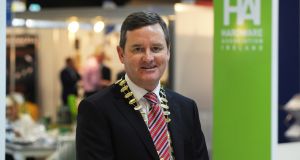 In addition to being the Home Project Centre Group’s CEO, Sean Moran is president of the Hardware Association Ireland. Photograph: David O’Shea

Like most people, I was shocked. Although the result of the poll was looking tighter than expected originally, there was little indication that the No campaign would win out.

Until there is certainty as to the nature of Brexit and what form it takes, it is difficult to be specific as to how it is likely to affect our business. Less than 10 per cent of our purchases are sourced from the UK and some suppliers have plants in other EU countries anyway, so we can redirect our orders.

A no-deal Brexit would have implications for some construction products we source in the UK. There is a requirement for us to provide certification that proves products used are in compliance with building regulations.

On top of that, the overall construction sector and, by extension, suppliers to the sector like ourselves, are likely to suffer if there is any form of hard Border. A large number of workers travel from Northern Ireland to the Republic every day to work on numerous construction projects – large and small. Anything that restricts or inhibits this movement could cause significant difficulties.

Not yet being sure of the outcome makes it difficult to prepare. We have researched all the products we source through the UK and have taken steps to ensure all products we stock are properly certified by EU bodies and comply with all relevant regulations.

The uncertainty surrounding Brexit has forced us to be far more focused on hedging any currency exposure we have to sterling.

As 100 per cent of our turnover is generated in Ireland, we are primarily concerned with where and how we source product. Even in the absence of Brexit, we are always alert to the possibility of finding new products or alternative sources for existing products.

Given the issues we are facing in the tight labour market, we believe it may be a real option for Irish companies to undertake recruitment in the UK, where EU nationals may be considering leaving. The UK may no longer be an attractive destination for EU workers to find a job, and they may choose Ireland instead. We will focus on that in future.

We are very clear in that we want to see a deal done. A no-deal Brexit is likely to have a significant economic impact on Ireland, and our industry will suffer from any fall-off in consumer spending and reduction in economic activity.

The best outcome, I think, is for a deal to be struck and for us to quickly move on and deal with any adjustment such a deal brings in relations between the UK and Ireland, eliminating this cloud of uncertainty that overhangs the economy.

How might the Irish or British governments and the EU help ease the pain of Brexit for your company or sector?

We’d like them to just get on and conclude a deal and end this limbo existence. The Irish economy, industry and individual businesses will deal with the rest and we will all come through it and survive!

I am not particularly impressed with how any of the parties in the process have handled the negotiations. It is all being played out in public with the media feeding on and amplifying the details of every meeting. As a result, there is a lot of rhetoric and point-scoring, with each side taking an entrenched position.

Brexit has become a really divisive issue in the UK both politically and socially and I believe the UK will suffer as a result of this for a very long time to come.

In terms of finding a way out of the current mess, the EU and Ireland, by very publicly taking the high moral ground (“this is a UK problem – we didn’t vote to leave”), are leaving very little room to manoeuvre. The indignant UK response to this is making a no-deal scenario a very real possibility.

In five years’ time how will business have changed as a result of Brexit?

The world will have moved on and we will all adjust. The Irish economy and society have always been resilient, and we have dealt with and overcome the challenges we have faced. Brexit will be no different.

On the other hand, I believe the UK will be the poorer for having taken the decision to leave the EU. Irish business will replace any business lost in the UK as a result of Brexit and will have found and developed new markets.