Sports Direct opposes any Debenhams plan that wipes out equity 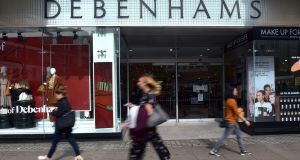 Mike Ashley’s Sports Direct has called on Debenhams to reconsider the offers of assistance it had made to the group. Photograph: Nick Ansell/PA Wire

Retailer Sports Direct said on Monday that any restructuring option pursued by Debenhams that could result in no equity value for the department store group’s shareholders “is not a workable solution”.

Debenhams said on Friday it was seeking £200 million (€232 million) of additional funds from lenders, allowing it to pursue restructuring options to secure its future. It said some options would wipe out shareholders.

Sports Direct, controlled by founder and chief executive Mike Ashley, is Debenhams’ largest shareholder with a near 30 per cent stake.

Sports Direct called on Debenhams to reconsider the offers of assistance it had made to the group, which included a £150 million loan and the purchase of Debenhams’ Danish business Magasin Du Nord for £100 million. – Reuters