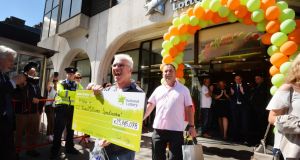 David Doherty and Craig Shearer two of the 22 members of the Dublin Bus lotto winning syndicate from the Broadstone Depot, which won the €23.8 million EuroMillions jackpot in 2016. Photograph: Alan Betson / The Irish Times

The National Lottery said it is disappointed by the Government’s response to offshore, bet-on-lottery operators and the threat they pose to traditional lotto sales in the Republic.

In response to a parliamentary question on the perceived threat from these new industry disruptors, the Minister for Finance Paschal Donohoe said there did not appear to be any evidence of a significant impact on the National Lottery here.

“While the Minister said there does not appear to be any evidence of a significant impact on the National Lottery from online lottery betting at present, we believe it is paramount that action is taken now before any serious damage is done,” a spokesman said.

“The loophole in Irish law which allows betting on the outcome of lottery draws, including the National Lottery, in our view represents a critical threat, and we remain concerned,” he added.

So-called synthetic lotteries are threatening traditional lotto monopolies all over the world by allowing gamblers to bet on outcomes without actually buying tickets for any draw. In some juridictions, they have cannibalised up to 20 per cent of the market. However, there is no evidence they have taken a significant market share here.

It is estimated there are up to 15 such firms operating in the Irish market and the biggest one, Gibraltar-based Lottoland, allows customers to select numbers for the EuroMillions draws at a reduced price.

“ELBA has always reinforced that very same argument and hopes the Minister’s assessment will be reflected in the upcoming report from the Irish Lottery Regulator on betting on lotteries,” it said.

Nonetheless, the National Lottery said any impact on sales would result in a reduction in the contribution to good causes, noting that almost 30 cent in every euro spent on National Lottery games goes back to good causes all over Ireland. More than €227 million was raised last year alone, or over €620,000 a day, it said.