Bob Mackenzie removed by board over ‘personal conduct matter’ 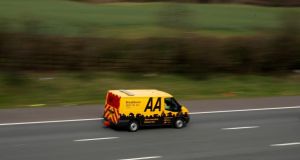 The AA said its performance in the first half of its financial year had been hit by a combination of an erratic workload and an inherently fixed cost base. Photograph: Phil Noble/Reuters

Roadside recovery and motor insurance company AA has fired executive chairman Bob Mackenzie for gross misconduct and lowered its full-year forecasts, sending its shares sliding as much as 18 per cent to a record low.

Mackenzie became AA’s executive chairman after leading a management buy-in in June 2014, when the company also floated on the stock market having previously been owned by private equity firms Permira, Charterhouse and CVC.

Some analysts said investors had been hoping Mackenzie would turn the company around and his departure could be taken badly, although others said there were tangible signs of improvements in performance coming through already.

AA Ireland is no longer part of the group, having been sold to US private equity group Carlyle and Carlyle Cardinal Ireland last year in a €156.6 million deal.

“Bob Mackenzie has been removed by the board from his role as executive chairman, from his other roles and as a director and as an employee of the company, for gross misconduct, with immediate effect,” AA said in a statement.

“This is a personal conduct matter,” an AA spokeswoman said, declining to give more detail. She said Mackenzie was not being referred to financial industry regulators.

Liberum analysts said they did not believe Mackenzie’s departure was related to any fraud.

The company also said its performance in the first half of its financial year, which started in February, had been hit by a combination of an erratic workload and an inherently fixed cost base.

“We now expect the full-year performance to be broadly in line with that of the last financial year,” it said.

Last year, AA had trading revenue of £940 million (€1,052 million) and earnings before interest, tax, deprecation and amortisation of £403 million. The company said the consensus forecasts for the current year had been £957 million and £413 million respectively.

“Many investors in the AA were backing the executive chairman’s experience in restructuring under-invested business,” Berenberg analysts said in a note, adding that his departure was unlikely to be taken well.

However, analysts at Liberum reiterated their “buy” rating on the stock, saying the company’s free cash flow was still very strong and some other key metrics were generally encouraging.

Veteran investor Neil Woodford’s firm owns 12 per cent of the stock, while Goldman Sachs owns 4 per cent, according to Thomson Reuters Eikon.

Bank of Ireland’s UK unit entered a deal two years ago to provide a range of financial services, including credit cards, loans, savings and mortgages, to AA customers in the UK under a 10-year exclusive arrangement. A spokesman for Bank of Ireland declined to comment on today’s news.

1 Why are markets booming when a crash is on the way?
2 How much do Irish people earn? And what will Covid-19 do to our wages?
3 Government deficit balloons to €5.3bn on back of Covid spending
4 Drumcondra credit union collapses as merger plan fails
5 Could your old car be giving away all your secrets to its new owner?
6 Dunnes Stores trials online ordering from Cornelscourt outlet
7 Live Register swelled by 213,000 in June
8 Permission sought for €150m film and media campus in Wicklow
9 Irish travel-tech company Rove raises €450,000 in seed funding
10 OneProjects confirms €11m investment led by LSP and Atlantic Bridge
Real news has value SUBSCRIBE