It looks the part but how does the new Range Rover Velar handle both on and off the road? We take it to Norway to find out. Video: Neil Briscoe 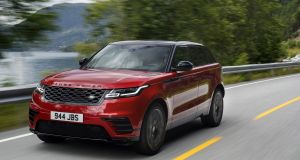 The Velar owes a great deal to the Jaguar F-Pace, the basic aluminium underpinnings of which it shares. 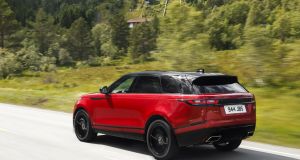 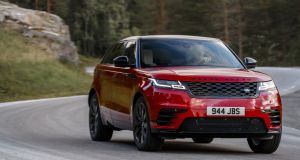 The Velar’s agility is wedded to a very comfortable ride quality. 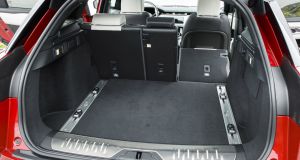 The Velar sprang from a styling idea, not an engineering one. 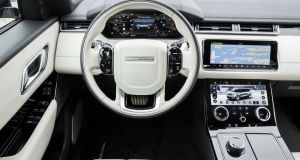 A 12.3-inch TFT screen is an option for the Velar’s instrument panel.

First, a little history lesson. Back in 1969, Land Rover’s engineers where testing the first-ever Range Rover prototypes on the road. They didn’t need to disguise them, as no one knew what they were anyway, but they couldn’t go out with a Land Rover badge. So someone cooked up the name Velar – either because it’s from the Latin “velare” or “to hide” or because it was a nice name they could make from the letters that they had in stock. Depends who you believe, but it worked. Velar prototypes were driven all over the UK and Europe and no one twigged it.

The new Velar is most definitely not trying to hide anything, and indeed is a major part of Land Rover’s transformation from a brand that worried only about engineering and prowess in the mud to one which is style-led and far more urbanite. That change is being led by chief of design Gerry McGovern (a man with Leitrim blood in his veins). “There’s no point in wearing rose-tinted glasses and looking at old Defenders” he told The Irish Times. “The brand is going through a major transition, and we have a desire to create cars that are less specialised, without losing their uniqueness. It’s as important for us to perform, now, in the urban jungle, as it is in the actual jungle.”

The Velar is almost the perfect midpoint of that process. It’s a car which sprang from a styling idea, not an engineering one. It sits midway in size and price between the decidedly urbanite Evoque and the larger, more traditional Range Rover Sport. It also manages to create a fascinating blend of on-road performance and off-road prowess.

Underneath, the Velar owes a great deal to the Jaguar F-Pace, whose basic aluminium underpinnings it shares. It’s not quite a shared platform (the hardpoints are different and the Velar has a much bigger boot than the Jag), more a shared set of components, but the extensive use of alloy means that this is a Range Rover which keeps its weight down to under two tonnes.

It looks visually light too. Unlike McGovern’s older Range Rover designs, which were far too bling for these eyes, the Velar is visually very clean, almost simple, but with delightful details such as the pop-out door handles and the ultra-slim LED headlights. it is an arrestingly handsome car, with the sweep of the slightly chunky rear roof pillar being the only visual bum note.

Inside, while the overall shapes and architecture are familiar from other Land Rover models, there have been some big changes. You can now have a big 12.3-inch TFT screen for the instrument panel which, like its rival system from Audi, can have conventional dials, or a huge sat-nav map and many other visual settings.

More arresting still is the new Touch Pro Duo information and entertainment system, which uses two vertically stacked screens to control virtually all of the Velar’s functions. You use them to manage the stereo, the heating, the sat-nav, the off-road terrain response system, and more. They look amazing, especially with those floating twin rotary controllers, and the ability to swipe some info and systems from one screen to another is really rather sci-fi, but one does carry the niggling worry of what if it all goes wrong?

Land Rover’s reliability reputation is less than stellar, it must be said, but the company says it has carried out extensive test-to-destruction programmes on the Velar, and all of its mechanical package is shared with Jaguar, whose reputation is much better. Hopefully, then, here’s a Land Rover one could feel confident recommending to friends.

You could certainly recommend it from a driving point of view. Land Rovers, and Range Rovers, usually have a stately, stolid air about them on the road, but the Velar feels far more agile and responsive than that. It must be down to the Jaguar genetic influence.

It starts with a four-wheel drive system which is actually mostly rear-biased, sending power to the front wheels only when you need it. The steering has that lovely sensation of metal parts moving in slick machine oil to it, and the pert nose of the Velar responds with alacrity when you turn into a corner. That cornering poise is then helped by torque vectoring (by braking individual wheels on basic models, or with a proper electronic differential on V6 Velars) which means that this big(ish) SUV clings to a chosen cornering line like a weight-watcher clutching their last Snickers.

That agility is wedded to a very comfortable ride quality. On the optional air suspension (we weren’t given the chance to test a standard steel-sprung model) the Velar rides, for the most part, with truly impressive deportment. The only downside is that on the optional 21-or-22-inch wheels, there are some impact tremors on poor surfaces, so it’s probably best to stick with the smaller rims.

Land Rover didn’t give us either a 180hp or 240hp 2.0-litre diesel model to test, but the 300hp (and 700Nm of torque) 3.0-litre V6 was certainly impressive, if equally expensive. It punches like Muhammad Ali low down, yet unlike him remains almost silent, and it’ll return a claimed 44mpg if you’re gentle. We also drove the 380hp supercharged V6 petrol, which is impressively quick but we averaged around 17mpg in it.

The cabin is almost equally impressive. We’ve been critical of recent Range Rover products not feeling sufficiently grand inside, but the Velar turns that around by using the usual cabin layout and architecture, but with the dramatic new two-screen Touch Pro Duo system.

There are two 10-inch HD screens, one in the conventional position, one lower down where you’d expect to find the heating controls. The lower screen comes with the delectable pair of physical rotary controllers, which appear to float on its glassy surface. With these screens you control almost all aspects of the Velar’s performance, from adjusting the terrain response when off-roading, to the air conditioning, sat-nav, entertainment and more. You can even swipe and drop controls from the upper to the lower screen if you like. Of course, the big worry here is, that with Land Rover’s rocky reputation for quality, there may come a day when the screens stay black, but for now at least they’re very whizz-bang indeed.

Venture off the tarmac and, for all its style and its Star Trek cockpit, the Velar proves itself a true Land Rover. It lacks optional low-range gears, but on our test route across the rugged west coast of Norway the Velar never slipped or stumbled no matter how rocky, muddy, slippery or even watery the terrain was. Air-suspension cars can wade through as much as 650mm of standing water, and there are surely few car makers who would trust clumsy journalists with a €100,000 car on terrain as unfinished as this.

It’s that immensely broad range of abilities that makes the Velar so appealing. None of us truly needs a 4K HD television or a 600m divers’ watch, but they are nice things, and it’s nice to know of their excess capacity. Thus it is with the Velar. Unlike most rivals, here is a car that can strut the catwalk as if it’s the star turn at Milan fashion week, or feel equally at home slipping through the boggy mud of a bleak field in Offaly. While it moves the Land Rover and Range Rover brands further along the style line when it comes to appeal, there’s more appreciation for marque history here than merely its badge.