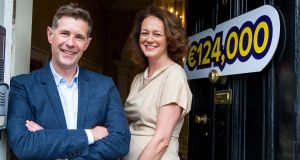 Architect Dermot Bannon and Catherine Walsh of the Reputations Agency at the RIAI announcement that its Open Door charity week raised €124,000 for the Simon Communities.

Architects have raised €124,000 for the Simon Communities through their annual Open Door initiative.

Architects across the State offer one-hour consultations with people looking to build or renovate their own homes during one week of the year. People pay €90 for the consultation and the entire amount goes to the charity.

“As an annual event, it has captured the imagination of the general public who subscribe in such large numbers.”