We identify the best in class and some rivals to consider 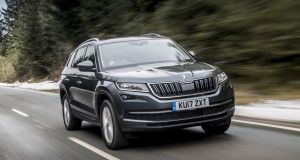 Skoda Kodiaq: its roomy back seats make it ideal for family life

The best one: Skoda Kodiaq

Having created a rolling thunder of pre-launch publicity quite out of keeping with what is, after all, a relatively humble family 4x4, the Kodiaq (named after an Alaskan bear, native tribe and island) suddenly found itself with quite a lot to live up to. After all, with the (impressive, and impressively affordable) Seat Ateca and the classy VW Tiguan sharing space and mechanical package with it, could the Kodiaq be that much better? Well, no but then again yes.

You see, the Kodiaq drives very much like the Ateca and the Tiguan (hardly surprising) and it has similar levels of quality and comfort. After which it’s the little things that start to count, and start to push it out in front – its impressive refinement, the umbrellas in the front doors, the intercom system that broadcasts the driver’s voice to the third row of seats. Plus that massive boot (720-litres for the five-seat version), and those roomy back seats make it ideal for family life.

One caveat though – it’s not cheap as you’ll pay a minimum €35,000 for a diesel model. Does that give the final advantage back to the Seat Ateca? Yes, but possibly only until the smaller, five-seat Skoda Karoq arrives in the autumn.

Wow. What a turnaround. The old Peugeot 3008 was always decent to drive, but lacked any sense of style or excitement. In fact it looked rather like a dressed-up barrel. Now, though, the second generation 3008 is majoring on style and showroom appeal, with sharp design and a genuinely excellent interior. That interior includes all-digital instruments as standard, something for which most rivals will charge you more. It’s also very avant-garde in there, with the tiny hexagonal steering wheel and chromed rocker switches.

Comfortable on a long journey too, albeit it’s not quite as spacious as some rivals. 1.6 BlueHDI diesel will be, for now, the best seller, but we have a fondness for the 130hp 1.2-litre PureTech turbo petrol. Grip Control electronics replace actual four-wheel drive (at least until the all-wheel drive plugin hybrid option arrives) and if you want seven seats, upgrade to the all-but-identical 5008.

We’ve flip-flopped between the Hyundai and its Korean sibling, the Kia Sportage. The Tucson is identical in every mechanical sense to the Sportage, and differs only in styling and in the interior. So why did the Tucson soar to the top of the sales table, become the best-selling car on the Irish market, while the Sportage flies at a much lower altitude? Hard to say, really, but possibly because the Tucson has the more conventional styling, and possibly because the Hyundai has a visibly lower price point (even if no one buys the basic model). Of the two brands Hyundai has proven itself to be the Korean heavyweight.

The Tucson is spacious, well-made and not bad to drive. Not the most exciting car out there, perhaps, but a decent family crossover all the same. Certainly that’s the view of thousands of seemingly happy Irish motorists. Some attractive promotional offers out there for 172 registrations as well.

If it seems odd that Toyota’s best-looking and best-driving car (well, this side of a GT86 at least) is a family crossover, well then that’s just an indication of how far into the 4x4 sphere the car market has lurched. Only the second vehicle to be launched on Toyota’s expensive new TNGA platform (the Prius was the first) the C-HR looks… well, great. Appealing to all? Nope, but that’s kind of the point – Toyota wants to escape its reputation for beige styling and the C-HR is the first to pick that lock.

Inside it’s little short of fantastic, with a heavily sculptured cabin that owes more to Lexus than to a Corolla or an Avensis. The 1.2 D4-T turbo petrol engine is lovely, with excellent refinement, but it is a touch short of puff. The Hybrid model, with its powertrain lifted from the Prius, is more urban-focused and gives its best around town, but it’s still impressive. Drawbacks? Well, you can’t have a diesel one, you can’t have four-wheel drive and the back seats and boot are really quite small. Still, you can have a stylish, dramatic Toyota and that’s got to be a good thing.