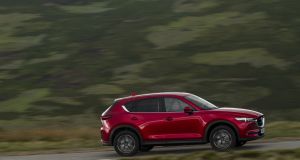 The recipe for the new CX-5 is very much a steady-hand, don’t-rock-the-boat one 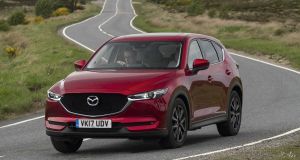 The CX-5 has arguably taken a step forward in style. It looks more sleek than before, with a lower bonnet line and improved aerodynamics.

To say that the fortunes of Mazda are closely entwined with those of the CX-5 crossover is something of an understatement. Not only did the original 2012 CX-5 usher in a new era of post-Ford chassis and engines for Mazda, it also sold in big numbers around the world, eventually making up a full quarter of all Mazda sales.

It’s been a strong seller in Ireland too, shifting 700 examples last year even though the model was on a run-out, and it’s nabbing big-spending customers for the Japanese brand – one quarter of Mazda Ireland’s customer for the CX-5 pick the high-spec 175hp all-wheel drive version.

So it’s hardly a surprise that the recipe for the new CX-5 is very much a steady-hand, don’t-rock-the-boat one. Mazda, one of the world’s smaller carmakers, and therefore more vulnerable to a downturn in sales of a popular model than would be others, simply cannot afford to create something that won’t resonate with its existing customer base.

So, on the launch, there was much talk of a customer-focused philosophy, of creating the vehicle backwards, starting with customer expectations. An uncharitable view might be that that is hardly an innovative approach.

What it pretty much inevitably leads to is a CX-5 very much like the old one, but better in most key areas. Mechanically, it is all but unchanged – the 2.2-litre diesel and 2.0-litre petrol engines are carried over unchanged (the 2.5-litre petrol with cylinder deactivation isn’t planned for Ireland yet, but Mazda is taking a wait-and-see approach to what the Government might have planned for diesel in October’s budget), and the chassis and platform are not much different. Body stiffness is up about 15 per cent, to the benefit of ride and handling, but it’s a pretty marginal difference.

Actually, one area where Mazda has made significant gains is in refinement and quietness. Traditionally, Mazdas have been among the noisier cars in terms of unwanted cabin hum and thrum, but across a mixture of roads and driving styles, the new CX-5 really was impressively hushed, with conversation possible at murmur-level. Such refinement would be impressive in an executive saloon. In a family crossover, it is doubly so.

The CX-5 has arguably also taken a step forward in style. Okay, so the new look, with a more prominent grille and narrower lights front and rear isn’t radically different, but it definitely looks more sleek than before, with a lower bonnet line and improved aerodynamics.

Mazda claims that it’s following Japanese traditions of “beauty through subtraction” – making the car simpler, but prettier. On the whole, it’s worked, especially in the much touted “Soul Red Crystal” metallic paint, which does indeed have a deep and abiding lustre.

In the cabin, things are a little less successful, primarily because it feels very much like a retread of what’s gone before. Indisputably, the levels of quality are nudging up towards the premium end of the grid, there’s plenty of space (and a decent 506-litre boot, which now comes with an optional electric boot lid), and after an initial sense that they’re a little too narrow, the seats reveal themselves as being really rather comfortable.

Mazda has used nice materials in the cabin, and it’s well equipped (all models get LED headlights, a seven-inch infotainment screen, and emergency city braking) but there are some flaws. The new heads-up display (now projected on to the windscreen) is a vast improvement on the old “monocle” pop-up one, but the infotainment system is starting to look desperately outdated, with uninviting graphics and a lack of current smartphone connectivity options such as Apple CarPlay or Android Auto.

At least the driving experience is up to snuff. Mazda has been recognised for well over a decade as a maker of cars which are sharper to drive than the class norms, and the CX-5 underlines that reputation, albeit without ever doing anything especially exciting.

Should we expect anything exciting from a family-friendly SUV? Perhaps not… Even so, the light steering is accurate and allows you to yaw the nose neatly into a corner, and if the CX-5 gives up and understeers as early as you’d expect a tall-riding car to do, well at least it’s well-signposted, and very progressive and forgiving. As with the previous model, it feels like a car which will look after you on an unfamiliar road.

The only dynamic deficiencies were a tendency to ride with a little too much fidget at times, and brakes that felt initially a little spongy, although ultimately they do stop the car pretty well. Beyond the brakes, it should be pretty safe. All models get autonomous emergency braking, while there’s an updated radar-guided cruise control which can now brake the CX-5 down to a full stop, and creep along in traffic for you. You can also have blind-spot monitors and active LED headlights.

As for the engines, ignore the 2.0-litre petrol option unless you really are permanently town-bound. It’s actually spritely enough, but it’s noisy and a bit wheezy, and actually the 2.2-litre diesel is more refined overall.

The 150hp version has all the power you’ll need, even if its 380Nm torque figure is about 20Nm shy of what you’d expect for such a big-capacity engine. The 175hp model tends to show itself as being a bit too thirsty in day-to-day driving, so the 150hp is likely to be the better choice, although we will need a drive at home to really test that.

As for pricing, the new CX-5 is about €1,000 more expensive, model for model, than the old one but then it is rather more sophisticated. A starting price of €28,995 doesn’t quite tell the full story – because that’s for the unlovely petrol, you assume that this is going to be a pricey car, but actually, at €35,995, the best-selling Executive SE 150hp version is the same price as Skoda’s five-seat 2.0-litre TDI Kodiaq. They’re certainly not identical in equipment, but the Mazda is better positioned than you might think.

Will it be enough though? Mazda Ireland reckons it will sell another 700 of the new CX-5 this year, and that’s in a falling market, which would be a solid result. It will certainly give existing CX-5 owners a more up-to-date model into which to trade, but one wonders whether more of what Mazda customers say they want will be enough to entice buyers from other brands?

Verdict: New CX-5 is a honed version of the old one. Enough to entice new buyers?

As apartment owners, what should we look for in our management company’s accounts?
8