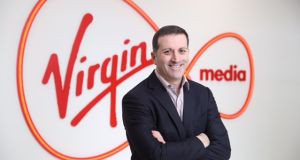 Virgin Media is expecting to roll-out its 4-K ready set-top media platform in the Republic later this year as it looks to claw back broadcast subscribers from rivals such as Sky.

The announcement comes as Virgin Media said total subscriber numbers in the State were largely unchanged last year. Gains in mobile and business subscribers were offset by a decline in customers signed up for its television packages.

The company’s vice president of commercial, Paul Farrell, told The Irish Times that full-year growth was largely underpinned by a rise in mobile and business customers.

The company, which only introduced mobile services via its Mobile Virtual Network Operator (MVNO) agreement with provider Three in 2015, said it now has almost 50,000 subscribers.

“At a local level the market is very competitive with a lot of discounting so we’ve done well and reached our numbers for the year,” said Mr Farrell commenting on the company’s performance locally.

“Our growth is really coming from where we’ve built the new network, and from mobile, where we added another 5,000 customers in January to bring us up to 55,000 currently. This will really start contributing to the bottom line soon as it took a while to get momentum,” he added.

Mr Farrell said he also expected to see strong growth in new regions where it is rolling out its services, although he added it takes time to build up customers in such areas.

“B2B is another area that we’ve seen good momentum, with 10 per cent growth last year. A bit like mobile though, our credentials in this area aren’t as strong as we’d like,” he said.

“The heavy investments we’ve made in 2016 and 2017 will start to help us grow this year,” added Mr Farrell.

Virgin Media has seen a slide in broadcast subscribers in recent years due to increased competition, from the likes of Sky and Saorview.

“We’ve a bit of catching-up to do. Our challenge in TV is twofold. One is a lack of awareness. There is a gap with customers where at a content level they aren’t fully aware they can get Sky Sports or Sky Movies so we’ve a campaign trying to reaffirm that which is paying dividends. There is also a lack of awareness around our TV Anywhere app, which we think is the best in the market,” said Mr Farrell.

Eos, which is already available to Virgin Media customers in Britain under the brand name V6 is based on the TiVo platform and comes with a 1 Tbyte hard drive as standard to store up to 500 hours of standard definition or 100 hours of HD TV. It allows users to record six shows concurrently, comes with built-in apps and promises a “smarter and faster” experience overall.

Mr Farrell said Virgin Media intends to start rolling out the new platform in the Republic later this year. The company has no immediate plans to introduce 5G mobile services locally, partly as a result of it being constrained by its current MVNO agreement.

Mr Farrell said he did not see Virgin Media Ireland’s future coming up for discussion, with Liberty Global remaining committed to the subsidiary.