Pay TV firm gets more games for less at its pays £1.19bn per season 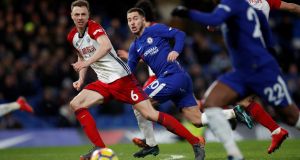 Sky has extended its Premier League rights to 2022, negotiating a package that sees the pay-TV firm get more matches for less money.

The company has won four packs of rights with a total of 128 games per season, paying £1.19 billion (¤1.34 billion) per season over three years. That is about £199 million per year less than the previous deal, a 16 per cent reduction. Its last deal gave it 126 matches per season.

Under the new deal, Sky will get Saturday evening matches for the first time, along with every first-pick weekend match and 14 second picks. Rival BT will broadcast 32 matches per season.

Sky said it had made investments across its content portfolio, as it moved towards a more broadly-based business.

“We continue to invest in content that our customers value and which complements our strategy to broaden our offer,” said Stephen van Rooyen, Sky’s UK chief executive.

The auction result Tuesday comes as Fox awaits U.K. regulatory approval to buy the remaining stake of Sky that it doesn’t already own. It’s agreed to sell the broadcaster to Disney as part of a $52.4 billion film-and-TV asset deal. Comcast is also said to still be eyeing some of Fox’s assets, driven by its interest in Sky.

It’s the first time in 15 years that the per-game price has declined, signaling a more rational approach by the broadcasters after years of rampant price inflation. Two packages of less desirable rights are still left to auction. “The simple conclusion is that the broadcasting battle between Sky and BT is over,” Neil Campling, a senior analyst at Mirabaud Securities in London, wrote in an emailed note. - Additional reporting: Bloomberg