Shares at highest level since 2007 as news giant signs up 2.6m digital subscribers 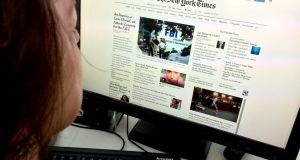 New York Times shares rose to their highest level in more than a decade, as the newspaper reported a surge in digital subscribers and revenues at the end of last year.

The company signed up 157,000 paying online readers in the fourth quarter, a 49 per cent increase over the previous year, which included the US election and the so-called “Trump bump”, a boom in readership among some of the US president’s favourite media targets.

The New York Times now has more than 2.6 million digital subscribers, while overall subscription revenue has passed $1 billion (€815 million) for the first time in 2017 and now accounts for 60 per cent of the company’s sales.

Shares jumped more than 14 per cent to $25.33 in afternoon trading in New York, their highest level since 2007.

At a time when publishers are juggling the decline of the traditional print business and difficulties competing with Google and Facebook for digital advertising budgets, the newspaper has shifted its commercial strategy from relying on marketers to paying readers.

“We still regard advertising as an important revenue stream, but believe that our focus on establishing close and enduring relationships with paying, deeply engaged users . . . is the best way of building a successful and sustainable news business,” said Mark Thompson, chief executive of the Times.

To hang on to subscribers it gained during the frantic news cycle of the 2016 election and the first year of the Trump presidency, the company has emphasised the quality of its reporting.

This has included a television ad that highlighted its coverage of sexual harassment that ran during the Golden Globes awards broadcast last month.

Mr Thompson said the company was encouraged by “strong retention” of the readers.

“We believe there remains a large opportunity to continue to extend our subscription reach and will continue to invest in areas of the business that will allow us to achieve that growth,” he said. – Copyright The Financial Times Limited 2018