Tronc sells LA Times and other newspapers in $500m deal 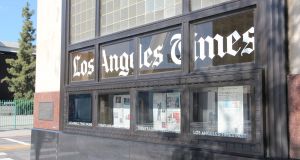 Time to sell: The deal follows a period of upheaval at the California title. Photograph: iStock

The Los Angeles Times has been sold to the biotechnology billionaire Patrick Soon-Shiong by Tronc for $500 million (€405 million).

The deal also includes the San Diego Union-Tribune and a number of smaller regional newspapers. Mr Soon-Shiong, who is also one of Tronc’s largest shareholders, will pay $500 million in cash and assume $90 million in pension liabilities. The deal values the papers being sold at eight times ebitda of $73 million in the 12 months ending September 30th, 2017.

Tronc, which also owns the Chicago Tribune and the New York Daily News, will use the funds to pay outstanding debt and lower pension liabilities.

“We will have a versatile balance sheet that will enable us to be even more aggressive in executing on our growth strategy as a leading player in news and digital media. We have a pipeline of robust opportunities and M&A will continue to be a significant part of our future,” said Justin Dearborn, chief executive.

The sale follows months of escalating turmoil at the LA Times. It has been hammered by declining advertising and circulation revenue and difficulties building a digital business, and has undergone several rounds of cuts in recent years.

Mr Soon-Shiong is a surgeon who became a billionaire after selling Abraxane, a multibillion-dollar drug he invented, to Celgene in 2010. He is also a minority owner of the Los Angeles Lakers basketball team.

1 State may face €1bn in compensation in Covid-19 case, Press Up claims
2 How I managed to cut my mobile phone bill by at least a half
3 Fiona Reddan: Who’s afraid of Revolut? Not AIB and BOI it seems
4 Lahinch Golf Club runs out of its own cash after €3m Covid-19 hit
5 ECB ‘should wipe Covid crisis debt’ to help nations recover
6 Salesforce in talks to buy Slack in huge cloud software deal
7 Workhuman predicts double-digit revenue growth for 2020
8 BOI customers to be charged twice with bank fees on New Year’s Eve
9 Son putting elderly dad under pressure to sign over land
10 Smarter ways to heat your home: Eight of the best modern systems
Real news has value SUBSCRIBE