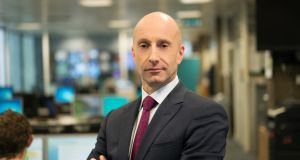 Jon Williams, RTÉ’s news and current affairs MD and board member of the Committee to Protect Journalists: “Very few of the murders of journalists ever result in people being brought to justice.” Photograph: RTÉ

When Meryl Streep stood up at the Golden Globes last year and invited Hollywood to join her in supporting the Committee to Protect Journalists (CPJ) – because journalists had become “one of the most vilified segments in American society” – the week that followed her impassioned speech saw an influx of almost $1 million in donations.

For an organisation like the CPJ this is “huge”, says its board member Jon Williams, who is RTÉ’s managing director of news and current affairs. “It’s about a sixth of our yearly income.”

This year the Hollywood Foreign Press Association donated $1 million to the CPJ on the night of the Globes – another boost for the independent, non-profit organisation with a mission to promote press freedom worldwide.

With Turkey the leading jailer of journalists for the past two years, threats to media are increasingly “on our doorstep”, says Williams.

“I just wonder how many of us who are lying on our beach in Bodrum really know that the human rights that we all hold dear and we are fortunate to enjoy here are being abused in places where we are lying on the beach.”

For the past four years November 2nd has been designated the UN’s International Day to End Impunity for Crimes Against Journalists, “a really catchy title”.

And yet just in January the CPJ was forced to call on the Council of Europe to put pressure on the Maltese government to mount an “effective investigation” into the murder of journalist Daphne Caruana Galizia, who was killed in October when her car was blown up.

Her reporting, based on the Panama Papers leak of offshore documents, had exposed government corruption in Malta.

“Very few of the murders of journalists ever result in people being brought to justice,” says Williams. The CPJ’s Global Impunity Index, which ranks the countries in order of where the murderers of journalists are most likely to get away with it, is about “a culture of impunity”, which is the greatest risk to press freedom, and which everyone has a responsibility to challenge.

“Because if we’re not careful, killing becomes the most effective form of [media] censorship,” he says. “That’s what Daphne faced in Malta.”

Hailing from Liverpool, Williams arrived in Montrose in January 2017 with extensive experience of world news. He had been managing editor of international news at ABC for almost four years, leading its reporting of the war in Ukraine, the European refugee crisis and the coverage of the Isis terrorist attacks in Europe. Before this he served as the BBC’s world news editor for seven years, managing 200 staff in 30 countries.

“There is no greater responsibility than sending someone into a hostile environment,” he says. “Ultimately, one person signs off on them going, and you then carry the responsibility for them, so bringing them home again is incredibly important.”

His involvement with the CPJ springs from the kidnapping of BBC journalist Alan Johnston in Gaza in 2007. “I spent 114 days of my life trying to get Alan back,” he says. During those intense days the CPJ was “incredibly generous” with its time and advice. “When Alan got out, I promised myself that I would return the generosity.”

The majority of journalists who are killed are working locally. The deaths of journalists on international assignments – such as Marie Colvin of the Sunday Times or Simon Cumbers, an Irish cameraman for the BBC who died of gunshot wounds in Saudi Arabia in 2004 – are exceptions to the rule.

In the absence of fresh military conflicts the number of journalist deaths declined in 2017 for the second year, after reaching record highs earlier in the decade. There were a “few very bad years”, Williams says. Reporting from a conflict zone is “inherently dangerous” and often the most that can be done is to mitigate rather than eliminate the risk.

But while places like Afghanistan and Iraq tended to be covered by the most experienced, “battle-hardened” journalists who had undergone hostile environment training, the same was not true of Libya.

“In Libya a combination of geography and technology meant a whole generation of people decided they could go and be war correspondents,” he says. A relatively short flight, a taxi to Tunisia, “and suddenly you’re a war correspondent” is how he describes it. “And we saw wars are not places to learn on the job.”

Is it the case that media organisations have too readily accepted work from freelance reporters without asking the necessary hard questions about the risks they are taking?

“That may have been true at one stage. I think that the Iraq war was a game-changer for international news organisations,” he says.

“If someone was to come to me today and say ‘I’m going to Yemen, will you commission me to do a story?’ I think my answer would be no, because we cannot guarantee that we could mitigate the risk to them. If we could we would have gone ourselves.”

But then if the freelance chooses to go anyway, that’s where the CPJ might step in. “There needs to be somebody who can then say, ‘okay, do you have body armour? No. Then here’s a set of body armour’. Or ‘do you know how to ensure digital security so that the stuff you’re taking isn’t on your phone or your laptop if you’re picked up by Houthi rebels? No. Okay, this is what you do’.”

It can sometimes seem as if, by discussing the threats they face, that journalists are special. “We’re not, actually,” says Williams.There is nothing special about journalists, we’re civilians like everybody else, and it’s civilians who need protection in war zones.

“It’s already a crime against humanity to target civilians under the laws of war. So we’re not asking for special treatment. We’re asking that our rights are protected like everybody else’s rights. But, and it’s a big but, freedom of the press, freedom of speech, underpins democracy.”

Silencing doesn’t have to involve threats to life or other physical attacks. Legal threats, especially in jurisdictions like Ireland where defamation awards are an unpredictable lottery, can also have a “chilling effect” on journalism.

“Certainly, the amount of the awards here are out of kilter with other jurisdictions,” says Williams. This creates a form of self-censorship in the media. “Very often it’s cheaper for news organisations to settle claims that they may feel have no basis, rather than take the risk of going to court.”

One of the things he is proudest of at Montrose is RTÉ Investigates, but he doesn’t believe “shining a light in dark corners” should be the preserve of our public service broadcaster.

“And it’s not,” he says. “But the risk is that commercial organisations end up erring on the side of caution and not even daring to shine a light because they can’t afford the potential consequences.”

Donald Trump, the inspiration for Streep’s speech, wants to strengthen what he calls the US’s “very weak” libel laws (there the burden of proof rests with the claimant, not the publisher).

Trump’s main legacy so far, however, has been to usher in what Williams describes as “a culture of denigration” or “a delegitmisation” of journalism.

The CPJ is tracking “chilling statements”, arrests and equipment seizures in the US media, as well as the physical attacks potentially prompted by White House rhetoric. In January, a man was arrested for threatening to kill reporters from CNN, a particular target of Trump’s “fake news” ire.

But while some of the money flooding in from Hollywood has been put to good use in the US, Williams says there’s “a balance” to be struck between this work and supporting journalists in “really difficult places” like Yemen.

“We do have to be quite careful that our focus doesn’t just switch to people in countries where journalists are under fire by words, rather than where they are under fire literally.”