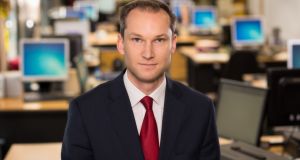 RTÉ News has appointed Will Goodbody as its new business editor. Mr Goodbody, who has been RTÉ’s science and technology correspondent since 2013, will lead all of RTÉ’s business coverage across television, radio and digital.

He succeeds David Murphy, who was made political coverage editor earlier this year.

Mr Goodbody first joined RTÉ in 2003 as a reporter and occasional editor on Radio 1’s Morning Ireland, before moving to the news desk in 2005. He previously worked for TV3 News and the Sunday Business Post.

RTÉ News has also appointed James McNamara to the new role of digital editor, in which he will be responsible for all aspects of RTÉ News & Current Affairs digital content, including content on social media platforms.

Mr McNamara, originally from Salford in Greater Manchester, has previously worked for the Manchester Evening News, the Irish Daily Mirror and the Sunday Business Post. He joined RTÉ in 2017 as homepage editor of RTÉ.ie.