Leslie Buckley steps down from O’Brien-backed IT security group 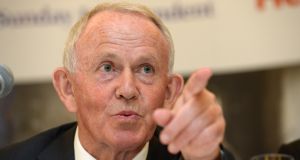 Former chairman INM Leslie Buckley has stepped down from CTI after serving 13 years on its board. Photograph: Dara Mac Donaill

Leslie Buckley, the former chairman of Independent News & Media (INM) who is being sued by it over an alleged data breach, has stepped down from the board of a Denis O’Brien-controlled company that provides secure IT services to INM.

Filings show that Mr Buckley last month resigned as a director and chairman of Business Recovery Systems, which trades as CTI Global. Mr O’Brien owns a two-thirds stake in the business, which previously traded as Another9.

Due to Mr O’Brien’s influence at INM, where he is the largest shareholder with almost 30 per cent, the publisher’s annual report discloses under “related party” guidelines that his CTI firm receives €200,000 in annual fees from INM.

Until recently, it listed INM on its website as a client, but this reference appears to have been removed. It is understood, however, that CTI continues to sell its tech services to INM.

INM is suing Mr Buckley over the circumstances surrounding a massive alleged data breach at the publishing group. The High Court recently approved an application by the State’s corporate watchdog, the ODCE, to appoint court inspectors to investigate this and other matters at INM.

In court papers, the ODCE alleges that Mr Buckley oversaw a secret operation to hire outside contractors to extract data, including the contents of journalists’ emails, from back-up IT tapes at INM.

CTI had no involvement in the alleged plan and is not being investigated in the ODCE case. Mr Buckley has consistently said he will “fully and robustly” defend himself regarding the INM investigation.

On Tuesday, Mr Buckley said he took the decision to step down from CTI after serving 13 years on its board, adding that his departure “does not relate to any other matter”. INM declined to comment.

Mr O’Brien’s co-investor in CTI is US businessman Steve O’Brien, who graduated with an MBA from Boston College in 1982, the same year as Denis O’Brien. The Irishman’s Another9 merged with Steven O’Brien’s New Jersey company CTI in 2016 to form CTI Global.

1 Wetherspoon’s panto-villain chairman may have the last laugh
2 British exceptionalism backfires in style as Johnson tests positive for coronavirus
3 Volkswagen burning through €2bn in cash per week
4 UK needs to be honest about its Covid-19 strategy
5 Retail landlords worried rents will dry up during Covid-19 crisis
6 Will Covid-19 force Primark to rethink decision not to sell online?
7 Rivian takes on Tesla with big batteries and subtler approach
8 Remote working doesn’t suit everyone, and it exposes woolly leadership
9 Usit travel group in liquidation due to coronavirus crisis
10 Can husband keep savings and half the house in divorce?
Real news has value SUBSCRIBE