GoldenTree among bondholders taking control of publisher of ‘i’ newspaper 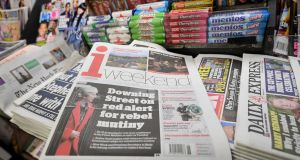 Johnston Press was laid low by debt-funded acquisitions in the early 2000s and the shift online of classified advertising and news. Photograph: Facundo Arrizabalaga/EPA

The collapse of Johnston Press Plc into the arms of a New York hedge fund marks an unusual twist in the long decline of the UK’s local newspaper industry.

In fact, it fits a pattern that has played out for years in the US, where hedge funds have become the new newspaper barons, acquiring hundreds of local titles and slashing costs as circulation falls.

Critics accuse them of vulture capitalism, starving newsrooms of investment to squeeze them for cash and hastening their demise. The new owners say cost savings are vital for regional journalism to survive.

Johnston Press’s bondholders led by GoldenTree Asset Management took control of the publisher of the i national newspaper and 200 other titles including the Scotsman and the Yorkshire Post at the weekend after it failed to find a buyer.

GoldenTree’s allies include two other US hedge funds – Carval Investors and Benefit Street, according to people familiar with the matter, who asked not to be named as the matter is private.

Originally a Scottish family printing business that moved into newspapers in 1846, Johnston Press was laid low by debt-funded acquisitions in the early 2000s and the shift online of classified advertising and news.

The weekend deal will cut Johnston’s £220 million of debt by 60 per cent and includes £35 million of new funding.

A new holding company controlled by the bondholders said it would safeguard the company’s future and preserve jobs. The bonds are quoted at about 55 pence on the pound, according to data compiled by Bloomberg.

Johnston Press has about 2,100 employees, who may end up with lower pension payouts if the company manages to offload its retirement plan to a state pension-protection fund.

In the US, hedge funds such as Alden Global Capital and Chatham Asset Management bought into newspaper groups that were still going concerns. Layoffs and cost-cutting have improved profitability, while stirring animosity and protests by staff.

But GoldenTree will need to find ways to lower Johnston Press’s costs that didn’t already occur to activist investors Custos Group and Crystal Amber Fund, which were among the biggest shareholders wiped out by this weekend’s deal. – Bloomberg