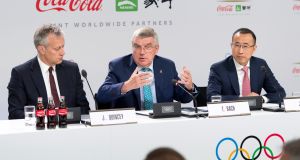 The organisers of the Olympic Games have signed a record sponsorship deal with Coca-Cola and China Mengniu Dairy worth a combined $3 billion (€2.6 billion), in one of the biggest ever corporate endorsements in sport.

On Monday, the US drinks maker and Chinese milk and yoghurts group will announce they will jointly sponsor the event between 2021 and 2032, a period covering six summer and winter games.

The move helps to secure the financial future of the world’s biggest sporting event into the next decade, and represents a show of co-operation between major US and Chinese companies amid trade tensions between the two superpowers.

Coca-Cola has been associated with the Olympics for more than a century and has used the games as a platform to market its products globally.

In renewing its place in the worldwide sponsorship programme of the International Olympic Committee, the governing body of the games, the drinks giant has agreed to a deal alongside Mengniu, the second-largest dairy products producer in Asia. Together, they will share the position as the official non-alcoholic “beverage” partner for the games.

“With Mengniu, we saw an opportunity to expand the dairy aspect of the beverage category,” said James Quincey, chairman and chief executive of Coca-Cola. “We will be activating our own individual marketing plans, but we are pleased to be a joint partner with a well-respected dairy company that is well known to us in China.”

For Mengniu, the move is part of ambitious plans to grow outside its home market. The company, based in Hohhot, Inner Mongolia, is buying entry to a global corporate elite that includes US chipmaker Intel, Japanese car manufacturer Toyota and Chinese internet group Alibaba. Each has spent hundreds of millions of dollars to be part of the IOC’s top tier of international sponsors.

Financial details for the agreement have not been revealed, but a person with knowledge of the terms said the deal was worth “multiple dollar billions”.

Another person briefed on the negotiations said the sponsorship was worth up to $1.5 billion, comparable to the $200 million-$250 million the IOC earned from recent deals with Alibaba, Bridgestone and Panasonic over a four-year Olympic cycle.

But they added the overall value of the partnership was closer to $3 billion, as both Coca-Cola and Mengniu have also committing to additional media spending, such as running advertising with Olympics broadcasters.

Mengniu, together with rival Yili, controls almost half of China’s dairy market, according to Euromonitor. But it is facing difficult conditions in its home country.

One area of concern is sales of infant formula, a significant revenue source for Mengniu. It lost market share to overseas rivals such as Nestlé following the 2008 baby milk powder scandal in which Chinese milk producers were found to have poisoned of hundreds of thousands of children.

Sales of baby formula are also projected to fall over the next year in China because falling birth rates, according to Goldman Sachs.

In response, Mengniu has sought overseas expansion, particularly in south-east Asia, as well as renewed focus on other dairy products such as yoghurt.

The deal also signals the eastward shift of the IOC’s sponsorship strategy. The top tier of Olympics partners was once dominated by western companies, with PC maker Lenovo the first Chinese company to be included at the 2008 Beijing games.

“When the [global sponsorship] programme was initially started, the criticism was there are a lot of American companies,” said Michael Payne, a former marketing head at the IOC who brokered the Coca-Cola-Mengniu deal.

“I think IOC has done a very good job at finding a proper geographic balance between leading American, European and Asian companies,” he said.

According to forecasts from the IOC, its top 12 sponsors provided revenues of a little more than $1 billion for the 2014 winter games in Sochi and the last summer games in Rio de Janeiro in 2016. Overall revenues from broadcasting rights and other commercial deals netted the organisation $5.6 billion over the same period.– Copyright The Financial Times Limited 2019.