A modern media puzzle: Digital, print and the left-right divide

In countries with more polarised politics, levels of trust in media are more in flux 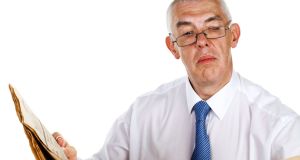 It feels safe to assume a correlation between newspaper consumption and age, then explain it by invoking the truism that people drift rightwards as they get older

If printed newspapers are your main source of news, you are more likely to self-identify as right of the political centre, not left of it.

Is this surprising? There are times in the past when the finding, courtesy of Reuters Institute for the Study of Journalism and a sample of 2,013 Irish people, might have seemed stranger than it does today. Now it feels safe to assume a correlation between newspaper consumption and age, then explain it by invoking the truism that people drift rightwards as they get older.

The converse also feels intuitively correct. People who told the Digital News Report that their main source of news was online were more likely to say they were left of centre than right of it. This was replicated in how users of irishtimes.com self-identified versus how buyers of the printed newspaper did: some 47 per cent of irishtimes.com users were “slightly left of centre”, “fairly left wing” or “very left wing”, compared with 37 per cent of print readers.

Overall there was no sign of increased polarisation among the Irish respondents. The centre really was the centre.

At a Broadcasting Authority of Ireland (BAI) briefing on the report (it funded DCU FuJo’s analysis of the Irish data), press ombudsman Peter Feeney observed there was no equivalent breakdown for how people saw themselves in relation to labels such as liberal and conservative, progressive and traditional.

“One of the recurring criticisms we see in the press ombudsman’s office is that the conservative voice in Ireland is not represented proportionately in the media,” said Feeney.

Jon Williams, RTÉ managing director of news and current affairs, took up this thread. “I think actually in the Irish context, terms like ‘conservative’ are perhaps not terribly helpful,” he said.

Williams cited an episode of RTÉ’s new digital series Explained by Prime Time that tries to identify the differences between Fianna Fáil and Fine Gael. “Answer: not a lot.”

The episode highlights how at the last general election, an RTÉ exit poll asked voters to place themselves on a scale of zero to 10, where zero was “very left wing” and 10 was “very right wing”. With the mean score among voters coming in at 4.98, Fine Gael supporters averaged 5.84 and Fianna Fáil’s were at 5.7.

“I don’t think it’s quite valid to argue that the views of the centre or the centre right are not reflected,” said Williams. “If by conservative you mean harking back to a previous time, and a quote-unquote traditional Ireland, maybe there’s a case to say that view is less represented, but it could be because Ireland has moved on.”

Why does the Digital News Report ask the left-right question anyway?

For starters, any context, even blunt context, on their audiences should be valuable information to news outlets. They can make a special effort to double down on one side or another (keeping in mind broadcasting impartiality rules), or if their user base is awkwardly skewed, they can try to attract a more balanced spread.

Ironically, in the days of firmer loyalty to single news brands, it was perhaps more straightforward for outlets to excel at the something-for-everyone approach. In today’s more pick-and-mix consumption of news, straddling the left-right spectrum runs the risk of irritating everybody in the bid to please.

The Reuters Institute, for its part, cautions against “fashionable” dismissals of the left-right axis as outdated. When it comes to how people interact with the media, “it is still able to explain a lot”, writes research fellow Richard Fletcher.

Perhaps because pretty much everyone in the UK is grumpy about Brexit coverage for one reason or another, the 'trust gap' between left and right has narrowed

This is about trust. In countries with more polarised or dramatic politics, levels of trust in news media are more in flux. Criticism of media coverage of the Yellow Vest protests, for example, has sent French trust in news plummeting 11 percentage points over a single year to just 24 per cent, the lowest in Europe. (The Irish rate was 48 per cent.)

Trust in news in the UK, at 40 per cent, is down just 2 percentage points since last year, but has notably declined 11 points since the pre-Brexit halcyon days of 2015.

Perhaps because pretty much everyone in the UK is grumpy about Brexit coverage for one reason or another, the “trust gap” between left and right has narrowed. Not so in the US. Overall US levels of trust in news clock in at a lowly 32 per cent, unchanged since the pre-Trump days of 2015. But within this statistic, there is now a deep divide.

Inspired by recent events, the Reuters Institute has now started researching the phenomenon that threatens to make a mockery of old left-right party systems. The rise of populism, or the exploitation of belief in a “bad” elite and a “virtuous” people, has prompted “new questions” for the media over “how far to represent populist views”, it says.

Given some news outlets, tending both right and left, fostered those views in the first place, it feels safe to say that not all journalists will be losing equal amounts of sleep.