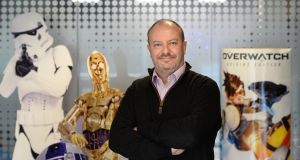 Keywords, which provides a raft of services to the video games industry, said it acquired the share capital of Descriptive Video Works from its founder for a cash consideration of 2.24 million Canadian dollars and the issue of shares in the Dublin company.

Descriptive Video Works provides audio description services for broadcast and streamed programming, feature films, documentaries and live action. In the past it was worked on the summer and winter Olympics for US broadcaster NBC.

“We are delighted to welcome Diane and the talented DVW team to the Keywords family,” said chief executive Andrew Day.

“Our voice-over studios around the world will be looking at ways in which they can work with Diane and her team to bring audio description production to European, South American and Asian markets.

“The acquisition of DVW also provides Keywords with its first studio in Vancouver, British Columbia, a city with very active involvement in film, television and video games and we hope to grow our presence there accordingly.”

Audio description is primarily for the benefit of visually impaired audiences and Keywords noted that it is “increasingly being mandated by law in a growing number of countries”. Descriptive Video Works has previously worked with broadcasters in Canada and the US such as CBS, CBC and Viacom and is an approved Netflix post-production partner.

In a regulatory announcement, Keywords noted the that Descriptive Video Works generated adjusted profit before tax of 660,000 Canadian dollars with revenues of 2.2 million Canadian dollars in the year to November 30th, 2018.

Established in 1998, Keywords now has more than 50 facilities in 21 countries and provides services including software engineering, testing and customer care services. It provides services to 23 of the top 25 game companies including Activision Blizzard, Electronic Arts, Sony and Ubisoft.

Inflation at near five-year low as consumer activity remains muted 11:48
‘Worst is behind us’ but recovery will be slow – Bundesbank economist 11:44
Another Perfect Day for Cork as animal-free dairy goods company raises $160m 11:33
NTMA raises €1.5bn mainly at negative rates 11:06
Jysk Ireland to merge with UK business as it seeks further growth 10:48
Search executive
jobs on irishtimes.com