US funds at odds in view of Ryanair’s prospects

Seen and Heard: Ministers avoid Huawei; Stripe boys in the money on Slack; and outflows from multinationals resume 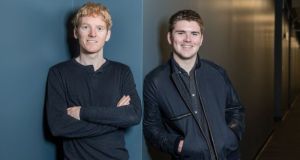 Stripe founders Patrick and John Collison, who are reported to have made a healthy return on their stake in Slack

A Chicago-based mutual fund has spent more than €1 billion over the past nine months building up an 8 per cent stake in Ryanair, according to the Sunday Business Post. Harris Associates is estimated to have spent about €1.1 billion to build up the stake, with the value of the stock having fallen to about €895 million over the period. Another US fund, Capital Group, has been winding down its stake in the airline in recent month, having sold more than €1 billion worth of shares to leave it with a 5.8 per cent stake in Ryanair, down from 17 per cent last year.

The Business Post also reports that the outflow of cash from US multinationals from the Republic has resumed, with new figures from the US treasury department showing over €10 billion has been repatriated. Last year some €50 billion was returned home by companies.

The US is reported to be stepping up its efforts to convince the State to ban Huawei from its 5G network, according to the paper. It says Jeanette Manfra, a high-ranking department of homeland security cybersecurity official, will meet with Minister for Communications Richard Bruton in Dublin this week. The visit follows a visit by assistant attorney general for national security John Demers, who was here last week.

In related news the Sunday Times reports that Government Ministers have been dodging opportunities to meet representatives from Huawei. Taoiseach Leo Varadkar and Mr Bruton are among those to have rebuffed the Chinese company in recent months.

The Sunday Times also reports that Stripe founders Patrick and John Collison are quids in after making a fortune from their stake in tech company Slack, which floated last week. The Collisons invested in a series C funding rounds for the company in 2014, although it is not known how much money they put in.

Woodford Investment Management, a beleaguered UK fund, sought to sell its stakes in a number of pharma companies to Malin in exchange for shares in the Dublin and London-listed lifesciences company. Woodford owns 23 per cent of Malin through two separate funds. The Sunday Times reports the share swap proposal was rejected by Malin when proposed earlier this year.

Both the Business Post and the Sunday Times report that among the winners from Uniphar’s planned listing are pharmacists around the State. Others among those in line for a good return on their shares are the Sisk family, which has a 13 per cent stake in the healthcare services group, the Wexford-based McCauley family and former C&C boss Maurice Pratt, who chairs the company.

The Sunday Independent leads with news that Germany’s Medici Living Group is planning to bring more than 5,000 new beds to Dublin over the next five years. The co-living provider is reportedly planning on opening buildings in a number of areas, including Rathmines, the Liberties, College Green, Ballsbridge and Portobello.

The same newspaper says the Irish Whiskey Association has raised concerns that MMA star Conor McGregor’s Prop No Twelve spirit might be interpreted as being a 12-year-old whiskey. The brand is named after Dublin 12, where Mr McGregor grew up.

Both the Sunday Independent and the Business Post report on the success of Trainline, a company headed by Dubliner Clare Gilmartin, which began trading in London for the first time on Friday. Ms Gilmartin is reported to have earned north of €17 million after cashing in part of her stake in the online train ticketing company, whose shares rose by as much as 24 per cent on its first day of trading.