Italian champions reported to have agreed to pay €5.6m in compensation to Chelsea to hire Sarri as its manager 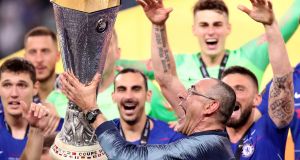 Chelsea manager Maurizio Sarri celebrates with his players on receiving the Uefa Europa League trophy in May, having defeated Arsenal 4-1 in the final. Juventus shares dropped on Friday amid reports that it has agreed a compensation deal with Chelsea to hire Sarri. Photograph: Adam Davy/PA Wire.

Juventus Football Club shares edged lower on Friday amid reports the soccer team will pay compensation to English Premier League side Chelsea to seal a transfer of head coach Maurizio Sarri to his native Italy.

An agreement in excess of £5 million (€5.6 million) has been reached, according to the BBC, while the Times of London said the amount could rise to £8 million. Juventus shares declined as much as 4.6 per cent on the news.

Sarri’s maiden season in the UK capital was marred by media speculation that he’d be dismissed as results fell short of expectations. Such an eventuality would have allowed a new club to gain the former foreign-exchange trader’s services for free.

Chelsea’s results improved during the latter months of the season as the club finished third in the Premier League to secure a spot in the Uefa Champions League for next season and also won Europe’s second-tier knockout competition, the Uefa Europa League.

Sarri previously worked for Banca Toscana, now a unit of Banca Monte dei Paschi di Siena, before quitting finance to pursue a career in soccer in 2001, according to a BBC profile.

1 My aunt never told us that Gran passed away with no will
2 Ryanair to slash 1,000 flights from August and September schedules
3 Political row brewing if Ireland loses its appeal on Apple
4 Netflix stock drops after downgrade by UBS analysts
5 The $6bn judgment pitting Nigeria against Irish businessmen
6 Will Revenue come calling with tax bill if inheritance tax threshold falls?
7 Green Party TD queries ‘usefulness’ of another appeal in €13bn Apple tax case
8 Delta Air Lines scales back flights it planned to add in August
9 If it’s safe to do so, could this be the time to spend for Ireland?
10 Davy raises mortgage lending forecast as home listings rise
Real news has value SUBSCRIBE