Little not so ‘naive’ about large tech any more 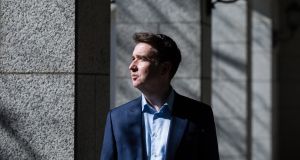 Mark Little, chief executive of Kinzen, a news curation app. These are tough times for idealists, he told Institute of Directors members and guests in a speech yesterday. Photograph: Stuart McNamara/Jason Clarke Photography

Ex-RTÉ journalist Mark Little, who founded social news agency Storyful and is now on his “difficult second album” with Kinzen, was careful not to sound too gloomy in his speech to the Institute of Directors (IoD) spring lunch in Dublin yesterday.

Recalling how a teacher had dubbed him “prematurely cynical” as a child, he said he had “never been anything but a journalist”, but lately he has been feeling an “idealism” that he thought came from being an entrepreneur.

It helps, too, when he sees how “civic-minded” the next generation seems to be. His own kids are “so much less jaded” than he was when he was a child, he reported.

These are tough times for idealists, as Little outlined in a speech to about 330 IoD members and guests titled “trust in the age of information overload”. A breaking down of trust in institutions including the media is “on a par with the collapse of financial institutions”, he suggested.

Just like people working for financial institutions didn’t understand how credit default swaps worked, digital media evangelists hadn’t quite anticipated that there could be negative consequences – including mass-scale political manipulation and the failure to prevent the uploading of videos depicting barbaric acts – to the beasts they created.

“We didn’t see these weapons of democracy being used against democracy,” he said. “We were naive, I will admit that, these digital evangelists who certainly believed that digital media was an unparalleled force for good, we didn’t see what was coming.”

Little, whose new venture, Kinzen, is a kind of news curation app, said regulation and reform was the answer, with the caveat that free speech must be protected. He would agree with recent political calls in the US – notably from Democratic presidential candidate and senator Elizabeth Warren – for companies such as Facebook to be broken up.

As it stands, just like certain banks before them, tech companies are “too big to fail”.