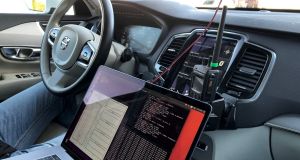 Volvo’s chief executive took a swipe at Tesla when he warned the premature launch of self-driving technology risks delaying “the best life saver in the history of the car”.

Hakan Samuelsson said it was “irresponsible” to put autonomous vehicles on the road if they were not sufficiently safe, as that would erode trust among the public and regulators.

Some carmakers have launched partially autonomous systems that can control steering and braking. But overstating the abilities of these cars will lead to “over-reliance” by consumers and cause accidents, Mr Samuelsson said.

The coming of the “robot car” has been screamed loud from every headline and tech blog for the past decade, but increasingly car makers are being more cautious about handing over control to the microchips.

“You have to be very careful when you introduce this, and that’s why I think it has to be safer than perceived,” Samuelsson said, adding that responsibility for the vehicles “comes back to the ones who are selling the system”.

Tesla has called its advanced adaptive cruise control system “autopilot” and claimed that its latest vehicles are “fully self-driving”. Several Tesla vehicles have been involved in fatal accidents, when drivers took their hands off the wheel and stopped paying attention to the road while using its automatic steering and braking feature.

Despite the hype it seems that many carmakers are pulling back on their promises of autonomous systems, or at least trying to control expectations. Carlos Tavares, the head of PSA Groupe has said that driverless cars may never make a mass-market breakthrough, because the technology will be too expensive for retail buyers. His sentiments seem to echo the feelings at Ford, which apparently took a step back from committing to full vehicle autonomy in the last few months. Similarly Apple, which had been working on a much-publicised-and-or-rumoured autonomous car project code-named Titan, has confirmed it’s planning to lay off 190 people associated with the project, including product design engineers and a machine shop supervisor.

Meanwhile, Nissan has suggested that robotic cars might need a human-based Mission Control-style system to help them deal with unexpected situations, while Porsche – with its customer base of ever-enthusiastic drivers – has sworn to be “the last car maker to include a steering wheel as standard equipment.”