Time for a gear shift at WeWork? 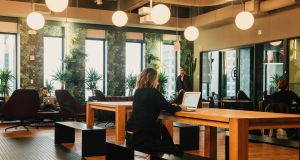 “It’s a time for us to continue to accelerate,” WeWork’s vice-chairman said after the company’s losses more than doubled last year to about $1.9 billion (€1.7 billion).

It seems like an unusual thing to say for a company that has aggressively expanded to the point of racking up massive accumulated losses. To put it in context, WeWork’s losses in the past two years could more than cover the State’s national broadband plan.

The assumption for a lot of companies of WeWork’s ilk is that investors will happily take poor results on board all in the name of rapid growth. See Lyft and Uber’s plans to go public. But an interesting thing happened with WeWork’s debt after it shrugged off those losses.

The cost of the company’s borrowing increased with its debt investors becoming a little bit tetchy with its bullish attitude towards what appears, on the face of it, to be unsustainable growth.

More problematic for WeWork is the point we’re at in the economic cycle. Up to now, with its substantial cash reserves, the company has been able to pick up any office it wishes. In Dublin alone it has five properties in its portfolio with others in the pipeline.

But such a strategy seems poorly timed, especially given as WeWork’s own occupancy rates fell in the final quarter of 2018 from 84 per cent to 80 per cent.

Headline rents in Dublin have fallen back and with European growth stymied by Brexit, among other things, it seems unlikely that WeWork could proceed with rapid office space acquisitions while also improving its occupancy rate.

Then in the US, recessionary fears are growing after the so-called yield curve inversion occurred last week.

Closer to home, a Manchester landlord withdrew from a deal with the company suggesting that the potential investment value of the building could be impacted.

WeWork appears to have gotten ahead of itself and rather than continue along this path, it would be prudent for it to quickly jam on the breaks.

The company says it could moderate growth and be profitable if it so chooses. Perhaps now is a good time to make that gear shift.