‘It’s showtime’ for Apple, but what does that mean for consumers? 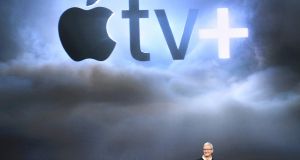 Science fiction fans will have much cause to be pleased by Apple’s late lurch into television. Investors believing they can ride an upswing from a rocketing revenue stream will also be happy. Not all fair competition advocates, however, will be ecstatic about it.

The first company in the world to hit a $1 trillion market valuation is pumping at least $1 billion into original series for its new subscription television service, unveiled at its snazzily titled “it’s showtime” event on Monday.

Discounting the relative spare change it has thrown at things like Beats 1 web radio and Carpool Karaoke: The Series, this marks Apple’s first major push to becoming a major funder of content. And for now it looks very much like the Cupertino, California, company has the cult Comic-Con audience to the forefront of its mind.

Among the greenlit titles for Apple TV+, the original content part of the platform, are three science fiction shows, among them a 10-parter based on writer Isaac Asimov’s popular Foundation series, which traces the decline and fall of a galactic empire. A second series, See, from Peaky Blinders creator Steven Knight is set in a future where humans have lost the power of sight, while a third now-wrapped show, For All Mankind, from Battlestar Galactica’s Ronald D Moore explores what Earth would be like now if the space race had never ended.

To these eyes, this already sounds like an enticing hat-trick of titles, and that’s before you consider it has also commissioned a comedy about the early life of Emily “I Felt a Funeral in My Brain” Dickinson.

Even at this early stage of its plans, Apple is already making a convincing stab at raising the eyebrows of avid genre fans. The iPhone maker isn’t just chasing nerdgasms, of course, it wants to convert them into paying subscriptions. And here’s where fair competition concerns held by the 2020 Democratic presidential candidate Elizabeth Warren come into play.

Rivalries have never been fiercer in the world of subscription video-on-demand (SVOD). The SVOD universe has been around long enough for industry people to drop that SVOD acronym into conversation in full confidence that it will be understood. At the same time, there is a sense that this business is still only warming up for the all-out warfare that is to come.

Soon the two leading platforms, Netflix and Amazon Prime Video, will be vying not only with Apple, but with a host of either brand new or beefed-up US and European services owned or linked to broadcasters. They include Disney+, a venture from AT&T’s Warner Media (which owns HBO), the UK broadcasters’ alliance Britbox, and a revamped Now TV from Sky’s new parent Comcast.

There is no shortage of competition per se. Indeed, from the perspective of viewers, unwilling or unable to shell out for every subscription going, yet frustrated at not being able to access the hot show their friends are dissecting scene-by-scene, it may feel like there’s far too much content splintered between far too many platforms.

In theory, the new Apple SVOD service has the capacity to alleviate that woe, because Apple will offer access to third-party services from industry frenemies through its TV app, albeit for a price.

But not every rival has been sufficiently wooed by Apple’s offer to become a third-party on its platform.

Netflix, understandably, does not like the idea of its exclusive content being consumed as a glorified in-app purchase on Apple TV and has ruled out becoming accessible through the service. It feels unlikely that doing so would ever have been as strategically favourable as, say, its current arrangements with pay-TV platforms owned by Liberty Global and Sky, with which it has access and revenue-sharing partnerships.

Apple wasn’t only launching a video streaming service yesterday. It also detailed a separate news and magazine subscription product, Apple News+. Again, several big-name publishers reportedly baulked at joining in, deciding that both Apple’s cut of the revenues and the risk to their own fragile pricing power was too high.

Sensibly, Apple wants to build up its regular services revenue at a time when its iPhone sales are slowing. But by doing so, it’s also doubling down on the thing that Warren argues it shouldn’t be permitted to do.

“Either they run the platform, or they play in the store. They don’t get to do both at the same time,” the senator told US tech and culture site The Verge in the wake of her broader call earlier this month for the break-up of Amazon, Google and Facebook.

Even if Warren or someone of similar conviction never gets anywhere near the White House, misgivings about Apple’s App Store power seem set to be forensically explored over the next few years thanks to another of Apple’s rivals, Spotify.

The Swedish music streaming platform has filed an antitrust complaint to the European Commission over the “Apple tax”, alleging that the 30 per cent cut Apple takes from subscriptions made via the App Store is an anti-competitive practice that gives Apple an unfair advantage and is harmful to consumers.

It feels safe to assume that many much smaller media companies at the mercy of Apple will be cheering Spotify along on this one. Indeed, it could wind up quite the saga.