Hard or disorderly: the impact of Brexit will be severe 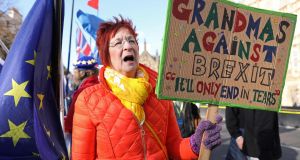 An anti-Brexit campaigner holds a “Grandmas against Brexit” placard as she protests outside parliament in London. Photograph: Getty Images

There used to be just two types of Brexit, soft or hard. But months of deadlock and impasse have landed us with a third more virulent variety – the disorderly Brexit. This involves the UK leaving without a deal but where there is additional disruption to trade in the short-run.

So not just the imposition of World Trade Organisation (WTO) tariffs on trade between Ireland and the UK, but administrative chaos at borders; long delays at ports; supply chain disruptions; and potentially another precipitous run on the pound and all that implies for Irish exports.

What’s most striking about the latest analysis from the Department of Finance and the Economic and Social Research Institute (ESRI) is just how close in scale the impact of a hard WTO Brexit, where there is an orderly period of adjustment for trade, is with the worst-case scenario, a chaotic Brexit with no orderly adjustment.

The study estimates that in a disorderly scenario economic output here would be 5 per cent lower after 10 years than if the UK remained in the European Union, while employment would be 3.4 per cent lower, which equates to 77,500 fewer jobs.

The less severe but nonetheless hard, managed Brexit would see economic output here curtailed by 4.8 per cent with employment reduced by 3.2 per cent, which is only slightly better.

But just as ever the Brexit story is caveated with so much uncertainty, and the ESRI cautions the short-run dynamics of this twisted process are almost impossible to predict from this vantage point as they depend “crucially on how smooth any transition to the new trading arrangements will be”.