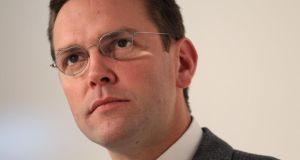 Sky chairman James Murdoch: faces Ofcom test to determine whether he is “fit and proper” to own a UK broadcasting licence. Photograph: Miguel Villagran/Getty Images

The UK media watchdog will conduct a test on whether Sky and its chairman James Murdoch are “fit and proper” to own a UK broadcasting licence at the same time as any public interest inquiry into 21st Century Fox’s £11.7 billion (€13.4 billion) bid for the European broadcaster.

British culture secretary Karen Bradley has already announced she is “minded to intervene” in the deal by referring it to Ofcom on grounds of media plurality – to ensure a diversity of viewpoints available across the media – and broadcasting standards.

Ms Bradley has until Friday to make a final decision but an announcement could come as early as Wednesday, media industry sources said.

Opponents of the Fox takeover – which would see the US media group buy the 61 per cent of Sky it does not already own – have been arguing that James Murdoch, who is also Fox chief executive, should face a “fit and proper” person test before the deal is approved.

Ofcom, which has a duty to be satisfied that broadcast licensees are “fit and proper on an ongoing basis”, said on Monday that any test would be carried out “in the same timeframe as any public-interest test”.

In 2012, the regulator concluded Sky was a fit and proper company to hold a UK broadcast licence following a review after the phone-hacking scandal at the News of the World.

But the report also said James Murdoch’s conduct in relation to events at News Group Newspapers, the Rupert Murdoch-controlled company which his son ran, “repeatedly fell short” of the conduct to be expected of him as a chief executive and chairman.

The former Labour leader Ed Miliband, an outspoken critic of the Murdoch family’s influence over the UK media, welcomed Ofcom’s decision to carry out simultaneous reviews.

“It’s good that they have said they are going to do a fit and proper review before the bid can go through,” Mr Miliband said. “It’s definitely progress.”

Fox, which last week hit back at Ms Bradley’s earlier letter outlining her initial thinking on an intervention, declined to comment. But people close to the group pointed out the US group has a strong record of compliance with the Ofcom code and that neither Sky nor Fox have been sanctioned by Ofcom in the past decade. – (Copyright The Financial Times Limited 2017)